Ever since the continents were all mapped, people had noticed that many coastlines, like those of South America and Africa, looked as though they would fit together if they could be moved like puzzle pieces.

With his revised publication of The Origin of Continents and Oceans in 1915 (originally published three years prior), Alfred Wegener was one of the first to suggest continental drift and plate tectonics. In his work, he described a ‘super-continent’ he called Pangaea had existed in the past, broke up starting 200 million years ago, and that the “pieces drifted” to their present positions. Citing similar ancient climates, rock structures, and fossil evidence.  [ Frank Taylor, an American scientist, had published a similar theory in 1910 but his work attracted little attention. ]

When continental drift was first proposed by Alfred Wegener in the early 1900s however, it was met with skepticism by the scientific community. The proposal remained controversial until the 1960s, when it became widely accepted over a fairly short period of time. Today, the theory of plate tectonics is key to the study of geology.

However, Wegener is not only the father of the theory of continental drift, he was also the first to describe the process by which most raindrops form. This process is now called the Wegener-Bergeron-Findeisen procedure. 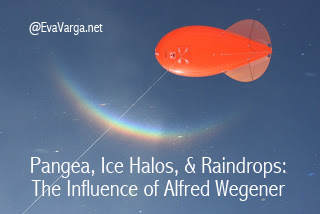 During Wegener’s lifetime the process by which cloud particles reach raindrop size was not known, but there was some idea how much rain, even during summer, began as snow in the clouds. In 1784, Benjamin Franklin had suggested this, and in 1904, Wilson A. Bentley, who spent a lifetime studying snow crystals and raindrops, found supporting evidence for the conjecture.

“Perhaps the only thing that saves science is the presence of mavericks in every generation.” ~ Alfred Wegener

In his 1911 publication, The Thermodynamics of the Atmosphere, Wegener noted that ice crystals invariably grow at the expense of super-cooled droplets because the crystals have a lower equilibrium vapor pressure. He then suggested that raindrops might result from this competition between ice crystals and super-cooled cloud droplets. Read more in the article Introducing Precipitation from the Eyewitness Companions: Weather

Wegener had hoped to document this process in real clouds, but other projects intervened and he never returned to the subject. Thus, it was left to Tor Bergeron and W. Findeisen to develop and prove the theory in the 1930s.

He also explained two rare ice crystal halo arcs that bear his name as well. Ice crystals often form in the frigid air just above the Greenland ice cap and can produce spectacular halos. In a 1926 article, Wegener explained two relatively rare arcs that appear opposite the sun and are now named in his honor. 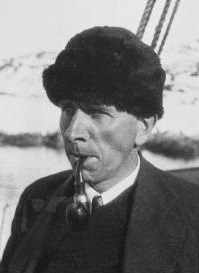 Born in Berlin on November 1st, 1880, Alfred Wegener, was a German climatologist and geophysicist.

From an early age he took an interest in Greenland. He studied in Germany and Austria, receiving his PhD in astronomy in 1904. No sooner did he finish his dissertation than he dropped astronomy to study meteorology, the new science of weather.

At a time when the conquest of the North and South Pole began to enjoy enormous international public attention, Wegener made his first expedition to Greenland as the official meteorologist on a two-year Danish expedition in 1906.

Wegener experimented with kites and balloons, pioneering the use of balloons to track air circulation. That same year, he and his brother Kurt set a world record in an international balloon contest, flying 52 hours straight. When he returned he took up teaching meteorology at the University of Marburg.

He was the first to use kites and tethered balloons to study the polar atmosphere.

His fourth and final expedition was in 1930 as the leader of a major Danish expedition to Greenland. He celebrated his fiftieth birthday on November 1, but shortly afterwards the team got separated, and he was lost in a blizzard. His body was found halfway between the two camps.