In addition to the lessons I presented on Earth’s interior and surface topography described last week, I also taught a short lesson on Geospheres and our Earth System. To those who had explored ecology with us in the spring, this was a bit of review though the material was presented in a different manner.

What is a System?

A system is generally described as a set of components that interact within a boundary. A clock is a good example of a system. Mechanical and often electrical components work together to display the time. In recent years, scientists have started to consider Earth, from the very top of the atmosphere to the core at its center, as a system with four major components or spheres that interact in very complex ways. 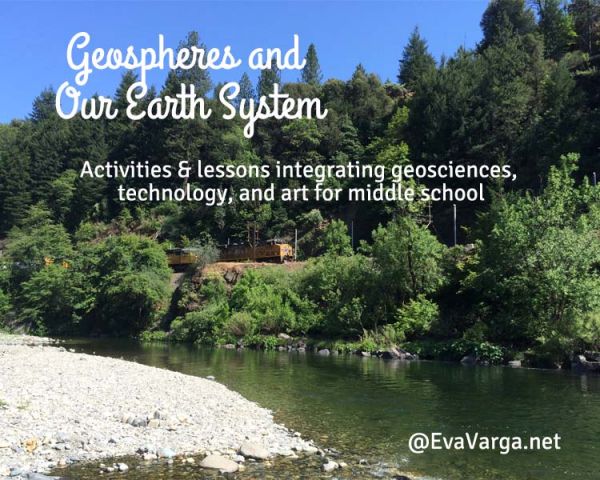 The area near the surface of the earth can be divided up into four inter-connected “geo-spheres:” the lithosphere, hydrosphere, biosphere, and atmosphere. Scientists can classify life and material on or near the surface of the earth to be in any of these four spheres. The names of the four spheres are derived from the Greek words for stone (litho), air (atmo), water (hydro), and life (bio).

In STEM Club, we focused on spheres that are most accessible to students: the portion of the geosphere called the pedosphere; the hydrosphere; the biosphere; and the atmosphere.

Beginning to perceive Earth as a system can begin with something as simple as when we ﬁrst feel warmth from sunshine or get wet standing in the rain. However, truly understanding Earth as a system requires a quantitative exploration of the connections among all parts of the system: air, water, land, and life. 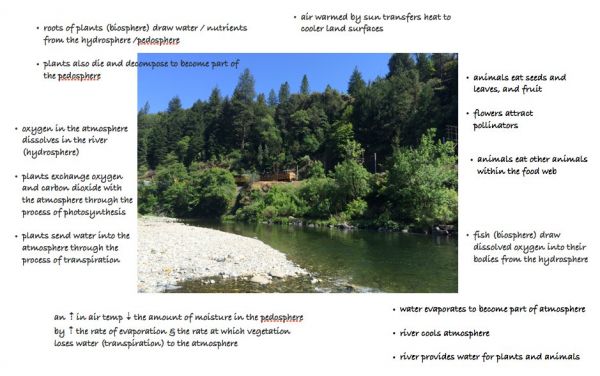 There are many simple examples of the interconnections between components and elements of the Earth system. I’ve listed a few here:

There are also connections between elements within a component of the earth systems.  For example:

Lesson Objective – By studying the flow of energy and matter locally, students will begin to build an understanding of how the four components of the Earth system work together to create and maintain Earth’s unique climate.

Last week, I shared with the class a powerpoint from Earth Labs and then assigned them the task of taking a photograph for this week’s lesson. The photo could be of their backyard, the lake, the river, or a park – it was entirely up to them.

I opened today’s lesson by sharing with them several infographics that illustrated the cycles of water and nutrients between the spheres: the hydrologic cycle (water cycle), the carbon cycle (photosynthesis, respiration, and transpiration), the nitrogen cycle, etc. Most of this was review for the students – but for some it was new material.

I modeled for the class the process of identifying the interconnections and processes evident in the photograph I took (example pictured above). I then asked students to annotate a photograph of their study site.

Lastly, the students created a simplified diagram of their study site to highlight the flow of energy and matter among the four components of the Earth system. 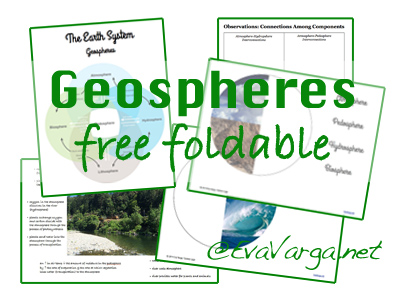 If you are interested in doing this lesson with your students, the printables and handouts are available as a FREE download, Geospheres Foldable.