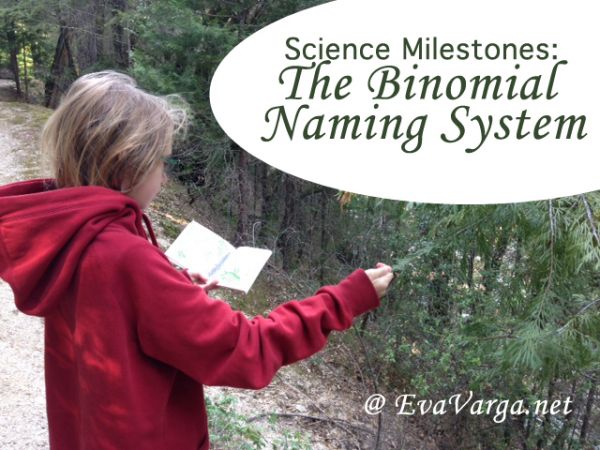 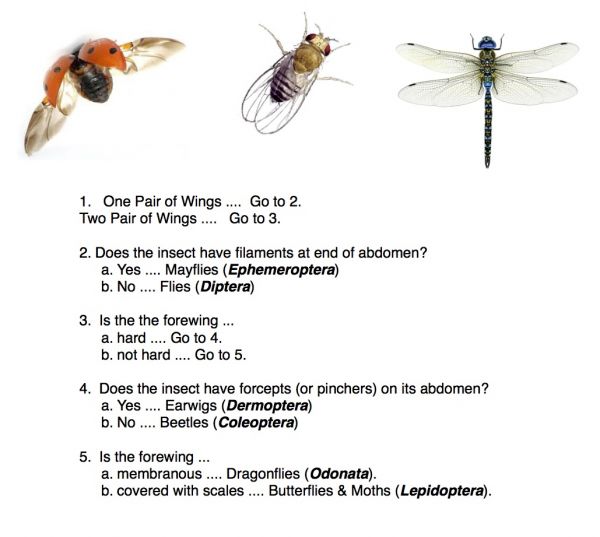 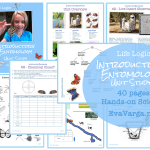 I started teaching a new class – live and in person for my local homeschool community.  I am very excited to teach formally again and this format promises to be both very rewarding and very challenging.  Rewarding because I get to share my passion for science with a great group of middle level students – such a fun age!  Challenging because as a homeschool mom, I do not have a class set of materials and equipment as I did in the public school and the kids vary in age and ability.

The course I have outlined for this first trimester focuses on life science.  We will be covering everything from scientific classification, cell structure, food chains and webs, and biomes.  There is so much to cover that another challenge will be simply deciding what to include. 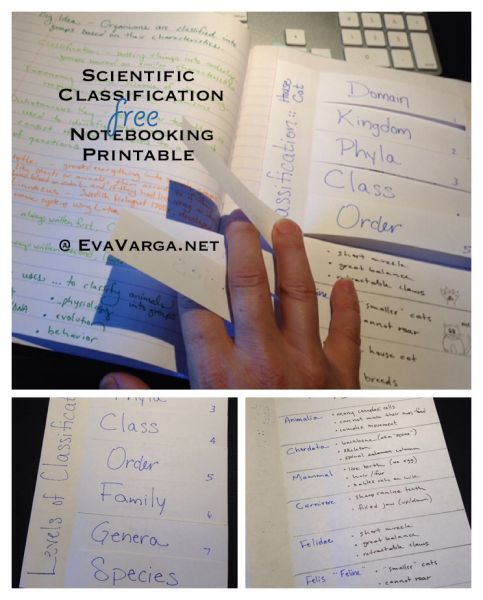 In our first session, I introduced the topic of scientific classification and how to use a dichotomous key.  Here is a simple video by Mark Drollinger explaining the six kingdom system:

There are 3 Domains – Bacteria (prokaryotic micoroorganisms), Archaea (single-celled microorganisms), and Eukarya (organism whose cells contain a nucleus and other structures (organelles) enclosed within membranes).  Domains can be further divided into Kingdoms.

Each of these kingdoms can be further divided into Phylum, Class, Order, Family, Genus, Species.  Some resources will show more specific levels including (but not limited to) superorders, subfamilies, tribes, etc.  For the purposes of this class, we will be using the levels shown here in bold and underlined.

If you have a BrainPop subscription, you may also wish to see the video on  Classification.

After a brief introduction and Power Point presentation on scientific classification (I could have been more concise than I was, actually), I introduced dichotomous keys.  Dichotomous keys are a tool that is used to identify organisms and that consist of the answers to a series of questions.

Here is another video by Drollinger that illustrates how these tools are used:

Working in small groups, the kids each removed one of his/her shoes and placed it on the table.  They then carefully examined each shoe, noting its characteristics. They then brainstormed two categories into which each shoe either fit or did not fit; thereafter physically dividing the shoes into the two categories.  They continued in this way until

each shoe stood alone.  They then recorded their dichotomous key on butcher paper and shared it with the class.  One group (which ended up splintering into two due to creative differences) chose to take the assignment further and rather than create a key for shoes, made one for the popular game, Minecraft. As I’d anticipated, they weren’t as successful with this but I loved their passion and commitment to see it through.

As it was clear that some groups understood and some did not – I took them outside and began to walk them through identifying one of the trees nearby using a dichotomous key from a book I’d brought along, Trees to Know in Oregon

by Edward Jensen.  Though I live now in California, this is one of the best field guides I have ever come across.  I highly recommend it to anyone in the Pacific Northwest.

For many of the kids, it was clear that they hadn’t had much experience looking at the characteristics of trees.  This real-time assessment provided me with a clear direction for our next session when we will be focusing upon plants. 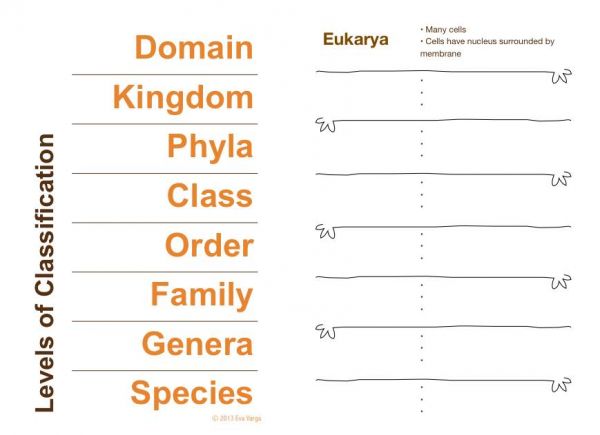 For homework, I asked the kids to create a flip book or foldable for their interactive science notebook.  We had a little trouble creating one from scratch in class that I did not anticipate.  I’ve thereby created one and provide it to you for your personal use – Levels of Classification. The photo collage at the top shows the sample I used in class. The graphic just above shows the foldable I created.  It is designed to open like a mini-book so you’ll want to download the PDF to get both pages.

I would love to see your kids’ work when they have finished.  Please post a link in the comments or feel free to email me a digital picture of their work.  If I get enough submissions, I’ll create a little slideshow. 🙂

We’ve been going to Indian Mary near Grants Pass every 4th of July holiday for nearly 15 years now. Each year, I spend a little time picking up the rocks along the shore and investigating the invertebrates that cling to the rocks. The past couple of years, since we are now “homeschoolers” we have gotten a little more scientific about our search and bring along tools for collecting. I hadn’t previously considered documenting our findings until this year. 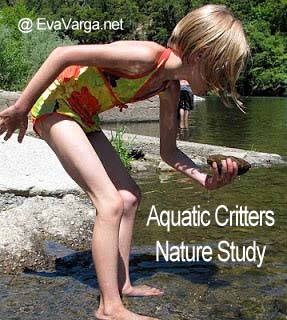 Searching for aquatic critters is one of our favorite summer activities. The kids spent hours along the river rubbing the rocks to see what critters might fall off into the dish pan. We then carried this back to the campsite where we could sit in comfort of the shade to observe our specimens more closely.

In past years, I’ve always seen a number of dragonfly, mayfly and stonefly nymphs. Planaria worms have also been prevalent.  This year however, I didn’t find a single planaria and instead found numerous midge larva and leaches!  Quite a surprise. 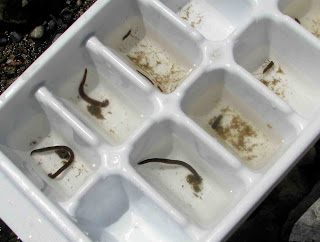 Additionally, we discovered many translucent little gel-like bubbles attached to the rocks as well as a couple of white tissue-like cocoon shapes (shown below).  I am not certain what these are, however. 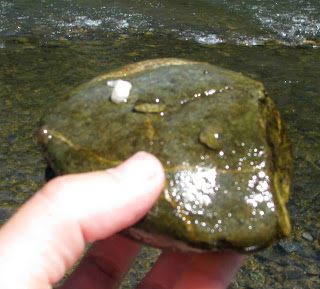 We pack along a few reference materials with which to identify our discoveries and to learn more about each specimen. Click on this link, A Guide to Aquatic Insects, for a free excerpt from Science Logic: Ecology Explorations.  Using these references, the kiddos and I spend some time sketching and taking notes in our nature journals. 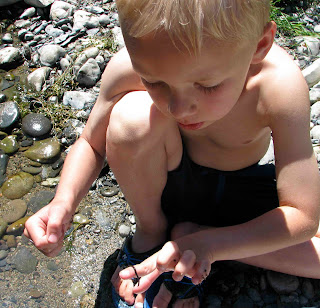 As I shared our discoveries with friends and family with whom we were camping, it was brought to my attention that a notice had been posted near the restrooms that a health concern regarding the portability of the water had been issued due to the water turbidity.  Turbidity is the cloudiness of a liquid caused by individual particles or suspended solids that are generally invisible to the naked eye, similar to smoke in. The measurement of turbidity is a key test of water quality. 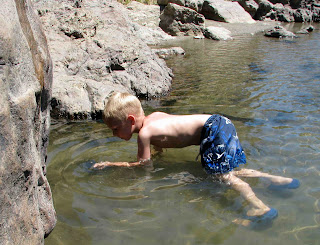 Using another key test of water quality, I was delighted that we had determined this for ourselves!