The first park we visited during our 10-day road trip was Death Valley National Park on the border of California and Nevada in the eastern foothills of the Sierra Mountains.   Death Valley is a land of extremes and we enjoyed the contrasts.  Exploring Death Valley National Park led us to discoveries of Salt Creek pupfish, the mineral borax, and the historical meaning of the 20-mule team.  Today, I share with you a few of our discoveries at Death Vally and describe a fun science experiment you can do with your kids to explore the chemistry of borax. 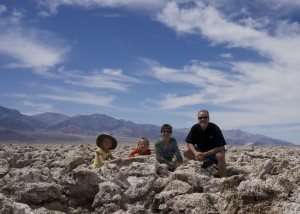 It was evident that despite desolate appearances, Death Valley is one of the most impressive areas for birdwatching in the National Park System. There are several factors that result in Death Valley’s long bird list. As one travels from the low valley desert, up the canyons, through the pinyon-juniper woodlands and onto the high boreal peaks, climate and vegetation changes are obvious. This wide diversity of habitat leads to a high diversity of bird species. 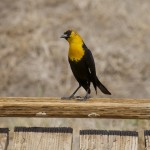 One of our first adventures in Death Valley was the Salt Creek Trail.  It was here that we were able to observe the yellow-headed black bird for the first time.  We were surprised by his lack of timidity for he was only a few feet away from us and hopped about the raised pathway as we took the time to take his photograph.

Another marvel we enjoyed along this trail was the opportunity to observe the endemic Salt Creek pupfish (Cryprinodon salinus salinus). The pupfish of Salt Creek have a difficult life, but it was not always so. Ancestors of the Salt Creek pupfish lived in streams flowing into a huge freshwater lake that filled the bottom of Death Valley more than 10,000 years ago. Lake Manly, as it is known today, was the end of a drainage system that at the time included water from as far west as the Sierra Nevada Mountains. As the climate became more arid over time, the Ice Age lakes and rivers dried up and the pupfish were stranded in permanent water holes scattered across the desert. 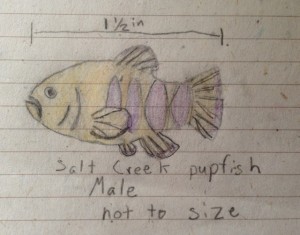 Today, those isolated ‘islands’ of water vary drastically from freshwater warm springs and marshes to Salt Creek’s seasonal briny stream.  To survive in the different habitats, the original pupfish species evolved into ten distinctly different species, each with their own shape, markings, habits, and survival strategies.   Sweetie drew a pupfish in her journal as a part of the Junior Ranger Program.  We mailed our completed books to the park ranger upon our return home, however, as our travel plans did not permit us to return to the visitor center that day.

I like to call these specimens ‘pupfish’ because they play like puppies. ~ Dr. Carl Hubbs, father of Western ichthyology

In addition to the ecology of the valley, early settlers to this region took advantage of the areas rich natural resources. Stories of gold strikes in the newly acquired territory of California had been published in an official notice to Congress in 1848, sparking the California Gold Rush, enticing more than 250,000 people to join the search for riches over the next four years.  Mining continued in Death Valley for 150 years. 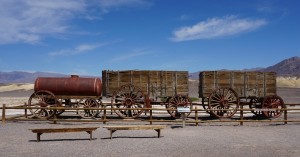 Crude shelters and tents once dotted the dry, flat lake bottom. Here, workers refined borax by separating the mineral from unwanted mud and salts, a simple but time-consuming process.  For more than a century, the 20 Mule Team has been the symbol of the borax industry.  The status is well-earned; mule teams helped solve the most difficult task that faced Death Valley borax operators – getting the product to market.  The teams covered 165 miles of forbidding terrain, traveling south through Death Valley, out Wingate Pass, then across the desert to Mojave.

The term  borax is used to refer both to a mineral and to a refined compound. The mineral takes the form of colorless to white soft crystals, which can sometimes have hints of brown, yellow, or green. The substance is also known as sodium tetra-borate and it has been known to humans for thousands of years. The mineral is a chemical compound of the element boron, and the chemical formula is Na2B4O7*10H2O.  A fun activity to try at home is to grow borax crystals in much the same way as you would make rock candy (sugar crystals).  It would also be interesting to research how borax has been used historically and how uses of varied between cultures.

Growing borax crystals can teach many different chemical concepts, such as a saturated solution and crystallization.  The basic instructions for growing crystals are show here.  Using this as your control, you may consider varying the solution (what you dissolve the borax into) to see how it affects crystal growth.  Perhaps humidity and ambient temperature play a role in the growth of crystals?

As you wait for the water to boil, bend a pipe cleaner into a desired shape (heart, star, circle, etc.).  Then tie a string around your pipe cleaner shape so that you can suspend it in your jar by tying the other end to a pencil or chop stick that will lie across the top of the jar.  Once the water is hot, fill the jar with it, measuring carefully to see how much water you use. For every cup of water, add three tablespoons of borax and stir well until it’s completely, or almost completely, dissolved. Suspend your pipe cleaner and leave overnight. Check it in the morning to see what grew.

Borax is a pretty common household substance and is thereby a great resource for different kinds of science projects. Borax is relatively safe and is very non-reactive, but it is toxic if swallowed, so it should not be used by very young children and it should not be used near food. It also can be irritating to skin and eyes, so you may wish to use regular household gloves when handling it and avoid getting it near your face.