We were in San Francisco last week and thereby took the opportunity to visit the Children’s Creativity Museum (formerly Zeum).  We weren’t quite sure what to expect (they opened only a few days prior to our visit) and upon our arrival, there was a school group ahead of us awaiting the museum’s opening.  The girl at the admissions desk gave us a 25% discount assuming it might be a little crowded but as it turned out, we still had the place nearly all to ourselves … one of the joys of homeschooling.  🙂 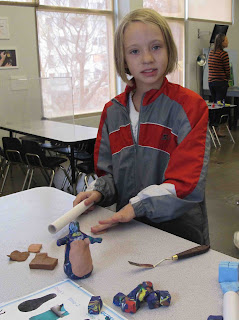 We went to the Claymation Studio first and were given a quick tutorial on how to create the characters for a short claymation movie.  We decided to cooperate together to bring to life the characters in Sweetie’s newest story … the Adventures of Perry the Porcupine (or so it is presently named).  Sweetie created Perry (shown in progress above), I created the king (visible for only a brief second in our movie), and Sweetie asked her brother to create the monster Perry encounters in the first chapter.  “You can create any monster you want!” she encouraged him. 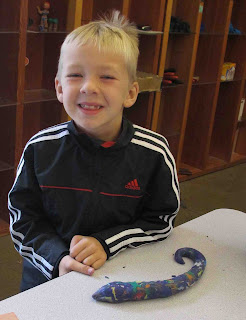 Believe it or not, we spent more than two hours working on our clay characters. When we were satisfied with our creations, we moved over to the backdrops.  The first scene in the chapter takes place in a village.  Sweetie, our director, selected the yellow building for the conversation between the king and his friend and loyal subject, Perry.  In the picture below, you can see how the camera and monitor were set up in relation to the ‘stage’. 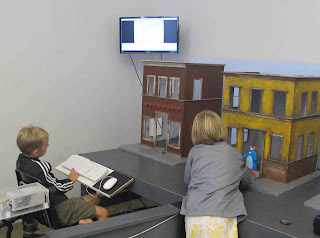 Buddy worked the camera, essentially pressing the space bar to take a photo.  Sweetie would thereafter move the characters ever so slightly to give the appearance that the characters were actually moving.  The entire process was surprisingly simple and we discovered after the first take that we could scroll back and manually delete specific photos as desired. 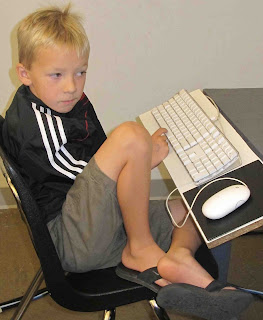 We spent only about 20 minutes creating our video, in total we were in this studio for nearly 3 hours and we were ready to move on and see more of the museum.  We learned that we needed to take many more photos than we originally anticipated.  The first scene was entirely too short.  We were also limited by the props available.  We would have like to make it appear as though Perry were walking through the countryside.  As it was, there was no way to elevate him.  It was also difficult to maneuver the snake monster in the film without our arms showing. 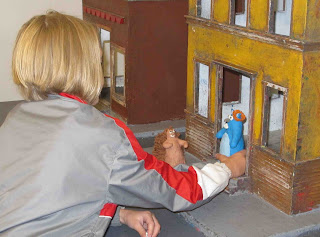 Despite our shortcomings, we were ecstatic with the results.  We had a fabulous time and look forward to creating more short films … to bring to life our characters and imagination.
Here’s the final product:
To create this video, we used a program called iStop Motion.  We hope to purchase it soon.