We recently enjoyed a family road trip to some of our nation’s most impressive National Parks. I’ll be sharing with you a number of our highlights and learning opportunities we enjoyed along the way.  Some experiences were enjoyed while confined to our car – love my smart phone!  The majority took place during our exploration of the parks and through participation in Ranger-led programs.  Along the way, I will also share tips that help make traveling with kids less intimidating and how to continue the excitement for learning upon your return home. 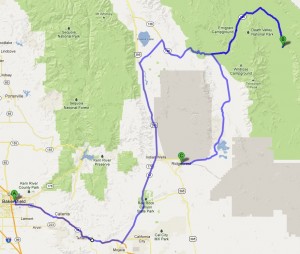 We essentially began our road trip in Bakersfield, California and departed shortly after breakfast.  We first drove east along CA58 through Tehachapi and then north along CA14.  What was of most interest to us was the sight of thousands of wind turbines dotted across the hillside.  The kids were full of questions: How many are there? How much electricity do they make?  Are they owned by one company?   To my delight I had 4G coverage and so I began to search for answers – No, I wasn’t driving! 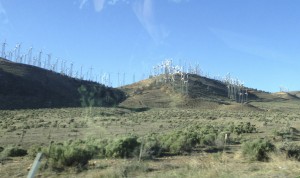 We came to learn the Tehachapi Wind Farm, with around 5,000 wind turbines, is the second largest collection of wind generators in California (7,000 at Altamont near San Francisco and 3,000 at San Gorgonio Pass near Palm Springs).Operated by a dozen private companies, they collectively produce 800 million kilowatt hours of electricity (enough for 350,000 people annually).  Over 15,000 turbines in the state yet wind power makes up only about 1% of California’s electricity.  As we drove past these turbines, we marveled at the numbers and compared this to what we had learned previously at Shasta Dam. In 2007, California hydroelectric power plants produced 43,625 gigawatt-hours of electricity, or 14.5 percent of the total.

We spent the majority of the day in Death Valley (I’ll write a separate post for each park) and then continued south along Hwy 178.  Along this route, we marveled at a sight off to the distance.  What are those?  Aren’t those strange, Mom? Upon googling, we learned these geological features were the Trona Pinnacles, one of the most unusual geological features in the California Desert National Conservation Area.

The unusual landscape consists of more than 500 tufa spires (porous rock formed as a deposit when springs interact with other bodies of water), some as high as 140 feet (43 m), rising from the bed of the Searles Lake (dry) basin. The pinnacles vary in size and shape from short and squat to tall and thin, and are composed primarily of calcium carbonate (tufa). Tufa is a variety of limestone, formed by the precipitation of carbonate minerals from ambient temperature water bodies. The spires now sit isolated and slowly crumbling away near the south end of the valley, surrounded by many square miles of flat, dried mud and with stark mountain ranges at either side.

Another intriguing site along Hwy 178 was the Searles Valley Mineral plant.  The pipes leading to the buildings had a perplexing shape the purpose for which we still haven’t determined; something like this:  ₋₋⊓₋₋⊓₋₋⊓₋₋  .  While investigating this curiosity, I discovered that the company sponsors an annual Gem-O-Rama during the second weekend in October.  For more than seventy years, countless thousands of visitors have come to Trona for the 36 hours of frantic, non-stop activity to collect some of the best and most desirable evaporite mineral specimens in the world.  What fun!

Upon our return home, I pulled out some of the minerals I had in my collection and we discussed the differences between evaporative and precipitate minerals.

The kids enjoyed the discussion and I hope they will take the time to do a journal entry of what they learned.  During our discussion, Sweetie was inspired to create rock candy.  When you make rock candy, you can see the shape of sugar crystals on a giant scale. The key is starting with a super-saturated sugar-water solution (heating the water will allow you to dissolve more sugar) and giving them lots of time to grow. As the water evaporates, sugar crystals form on the string or stick, and the shapes that they form reflect the shape of individual sugar crystals.

When traveling, encourage the kids to look out the window.  What new things do they see?  What questions come to mind as you travel from one place to another?  Does the geology change?  Do you see historical evidence of early settlers?  Are there historical markers or dilapidated buildings with stories to share?  Perhaps something will spark an idea for a young writer to create a story of his own.