Coming in March – the National Parks Service, National Geographic, Golden Gate National Parks Conservancy, and Presidio Trust are teaming up to host a 24-hour BioBlitz species count and two-day Biodiversity Festival.  Participants will have the opportunity to learn about redwood canopy plants and animals, take a picture as a redwood tree climber, or look closely at redwood organisms. 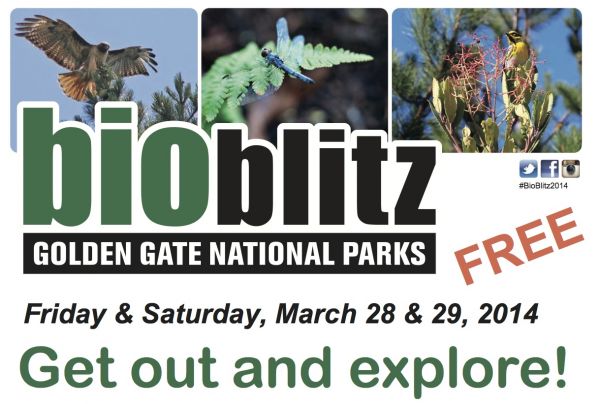 Be a Part of an Inventory Team!

A BioBlitz is a 24-hour event in which teams of volunteer scientists, families, students, teachers and other community members work together to find and identify as many species of plants, animals, microbes, fungi and other organisms as possible.

The three national park units that make up the Golden Gate National Parks encompass more than 80,000 acres and 91 miles of shoreline along the northern California coast. These parks are home to an amazing array of biodiversity, including over half of the bird species of North America and nearly one-third of California’s plant species!

The joint BioBlitz and Biodiversity Festival will be held Friday-Saturday, March 28-29, 2014 to help better understand, appreciate, and protect this natural treasure.

As part of BioBlitz 2014, Save the Redwoods League and scientists from Humboldt State University will be leading the first-ever biodiversity study of the redwood canopy at Muir Woods. Never before have the trees at Muir Woods been climbed.

Join an expert-led species inventory team to discover, count, map, and learn about the parks’ diverse organisms, ranging from microscopic bacteria, wildflowers, and seals, to hawks and towering redwoods. Choose the park location, date and time, or subject matter that interests you most. Spots on inventory teams go quickly.

For more information and to register as a part of the inventory team, visit Golden Gate National Parks BioBlitz 2014.