As summer has arrived, we opted to end the term with Charlotte Mason style exams for the second time.
Poetry/Memory Work:
This is one area in which I continually drop the ball.  I’d love to incorporate this into our curriculum, I just haven’t been able to do so thus far. 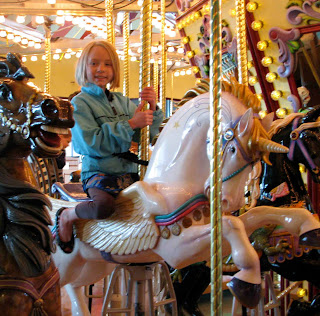 Read-Aloud:
1. Which was your favorite read aloud book from this year?  Why? [The Named; The Lost Years of Merlin; 21 Balloons; Odd and the Frost Giants; Into the Land of the Unicorn (Unicorn Chronicles book 1); Strawberry Girl; Percy Jackson and the Lightening Thief; Bud, Not Buddy; The Ahkenaten Adventure (Children of the Lamp trilogy book 1); The Adventures of Robin Hood]


My favorite book this year was The Ahkenaten Adventure because I consider Gins as magic people like fairies.  I also like it because they went to Egypt and slept outside by the pyramids.

2. Can you retell a part of your favorite read aloud?

I liked the whole thing.  One part that stands out when they went to Egypt.  They slept outside by the pyramids. They had a picnic by using their magic powers to make the food they wanted.

History / Geography:
We didn’t even come close to finishing The Story of the World Volume 2: The Middle Ages.  We are presently on chapter 18 of 42 … even if we work hard through summer, I doubt we’ll finish by September.  Oh well.  I’d rather move at a pace that is comfortable to ensure they have a firm grasp of the chronology than speed through. It is not a race after all.

1. Tell me what you remember about Muhammad OR Charlemagne OR Eric the Red OR Leif Ericsson OR another historical figure of your choice.

(will add her response soon)

2. Who were the first Europeans to discover North America?

Leif Ericsson was the first European to discover North America.  He discovered the northern coast of Canada. He came over from Greenland.

3. Show me Great Britain, Romania, Honduras, New Zealand, France and Scandinavia on the map. What can you tell me about one of these countries?

Scandinavia includes Norway, Sweden, Finland, Iceland and Denmark.  The first three countries are so far up that it is really cold.  The northern parts of these countries are in the Arctic Circle.  They eat lots of fish.  In Norway, they eat lefse and flatbread.

Science:
1. What was your favorite science unit this year.     SPACE

2. Tell me something you have learned about space.


I learned that there are 9 planets in our solar system.  They revolve around the sun.  The planets are Mercury, Venus, Earth and Mars.  Jupiter, Saturn, Uranus, Neptune and Pluto! Pluto is at the end but I still consider it a planet.

3. Tell me about your favorite planet.

Pluto is my favorite planet.  I learned that Pluto is a Dwarf Planet.  That makes me sad.  It is smaller than our moon.  It has three moons of its own, the biggest is called Charon.

We didn’t study composers or artists as we have in the past.  However, both kiddos began taking piano lessons.  Through their studies, they have been introduced to new composers.  Here is what MeiLi said about learning piano.

My favorite songs that I like to play are Moonlight Sonata by Beethoven and Marche Slave by Tchaikovsky.

I selected  The Twelfth Night because it is one of the plays that will be performed at the Oregon Shakespeare Festival this year.  I had expected to attend a performance in the summer and thereby sprinkled different readings throughout the year.  As we progressed, I discovered that they have a Family Performance and figured this was a better option for us as it would be our first performance of this caliber.  Unfortunately, The Twelfth Night will not be performed until September so we have several months yet.

1. What can you recall about The Twelfth Night.

I liked The Twelfth Night a lot.  It was about a brother and sister that got separated during a storm when they were on a ship.  The girl washed ashore with the captain.  She disguised herself as a boy.  This led to lots of confusion when her brother later came to town.
2. What was your favorite scene?
My favorite scene was when they all got mixed up.
Field Trips:
1. Of all the trips we’ve taken this year, which one was your favorite?  Why?
My favorite field trip this year was the Pine Mountain Observatory because I like space and they study space up there.
2. Describe two things that you learned on this trip.
I learned how the big telescopes move and how they find the galaxies.  When we look them, we see what they looked like millions of years ago.  I also learned how to see the constellations in the sky like the Big Dipper. The hottest planet is Venus because it has all these gases that trap the heat from the sun inside like a blanket.
Future:
What would you most like to study or are most looking forward to studying in the coming year?
I am looking forward to studying the human body in the next year.  I am also excited about learning about Africa with my best friends Jesse and Maggie.