It is not easy to tell the difference between rocks & minerals because there are so many kinds of them. It takes years of study to be able to accurately identify a mystery rock.

Last week, we learned of the rock cycle which describes the dynamic changes over time among the three main rock types: sedimentary, metamorphic, and igneous. Today, the kids took part in two rock identification labs to further develop their understanding of the basic rock types.

A mineral is a naturally-occurring substance formed through geological processes that has a characteristic chemical composition, a highly ordered atomic structure, and specific physical properties. A rock is a naturally occurring aggregate or combination of minerals. Rocks do not have a definite chemical composition. All rocks are made of 2 or more minerals, but minerals are not made of rocks. 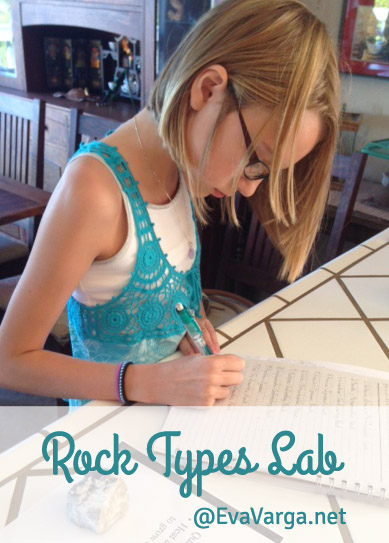 Twelve stations were set up around the room – each with a rock specimen and a card that provided hints as to how that rock was formed. The students rotated amongst the stations and recorded first the name of the rock and then identified which of the tree rock types to which it belonged.

Here are just a few examples of the text clues given on the cards:

Marble :: In the past this was a sedimentary rock called limestone. However, heat and pressure have changed it into a much harder rock called marble. Marble today is used as a building material.

Limestone :: This rock formed when the small skeletons of diatoms, plankton, and other water animals sink to the bottom and are then buried and squeezed to form rock.

Pumice :: This rock came from the foot of a small volcano in central Oregon called a pumice cone. It is so full of holes that it will float in water. 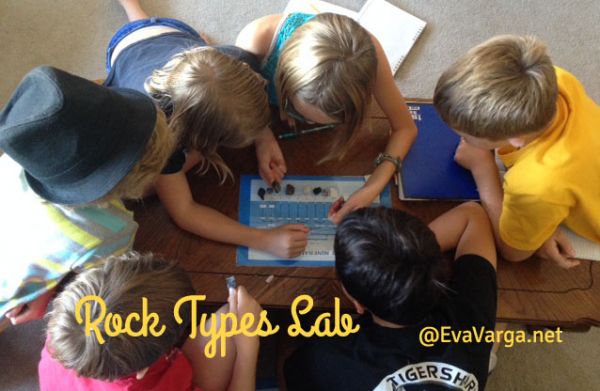 We then utilized a dichotomous rock key to identify a dozen or so small rock and mineral samples.  In most cases, we don’t see a rock during its formation, so we rely on rocks’ observable clues to infer their formations. Two clues that indicate a rock’s formation are its composition and texture.

Together we observed the rock’s texture, conducted a basic hardness test, and identified the minerals that compose it as best we could.

When Using a Rock Key there are a few things you need to know:

When minerals have the time and space to grow into their crystal forms, they grow to beautiful regular shapes that are easy to recognize once you have seen a few examples. In rocks, crystals grow up against each other; they have straight edges and often show flat shiny faces that reflect light like tiny mirrors.

Grains that are not crystals in rock do not have flat shiny faces. They are rounded, like grain of sand, or jagged, like a piece of broken rock. Grain size in rocks can mean the size of crystal grains or of fragments:

Gas bubbles form round or elongated holes in rocks. In pumice, the bubbles may be very tiny. In scoria or vesicular basalt, the bubbles are larger, often as large as peas. 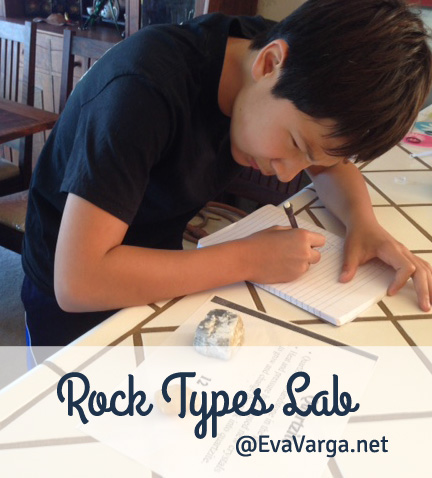 For more information on rock types and identifying rocks, I recommend these resources: