Rocks, like mountains, do not last forever. The weather, running water, and ice wear them down. All kinds of rocks become sediment. Sediment is sand, silt, or clay. As the sediment is buried it is compressed and material dissolved in water cements it together to make it into sedimentary rock. If a great amount of pressure is exerted on the sedimentary rock, or it is heated, it may turn into a metamorphic rock. If rocks are buried deep enough, they melt. When the rock material is molten, it is called a magma. If the magma moves upward toward the surface it cools and crystallizes to form igneous rocks. This whole process is called the Rock Cycle.

In STEM Club this week, I shared a game with the students with which we simulated cycling through the rock cycle. I began the lesson with a visual diagram of the rock cycle laid upon the tables and requested the students copy it into their journals. The three major rock types (igneous, metamorphic, and sedimentary) were illustrated, as well as the processes that act upon the rock material. 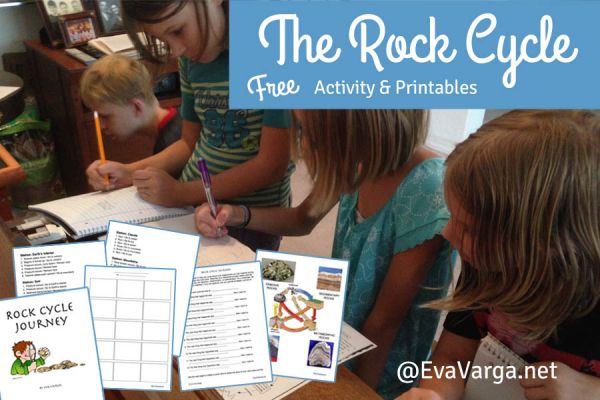 Magma is molten rock.  Igneous rocks form when magma solidifies. If the magma is brought to the surface by a volcanic eruption, it may solidify into an extrusive igneous rock. Magma may also solidify very slowly beneath the surface. The resulting intrusive igneous rock may be exposed later after uplift and erosion remove the overlying rock. The igneous rock,  may then undergo weathering and erosion and the debris produced is transported and ultimately deposited (usually on a sea floor) as sediment.

The new rock that forms is called a metamorphic rock. If the temperature gets very high the rock melts and becomes magma again, completing the cycle. The cycle can be repeated, as implied by the arrows. However, there is no reason to expect all rocks to go through each step in the cycle. For instance, sedimentary rocks might be uplifted and exposed to weathering, creating new sediment.

Set up eight stations at which a change in the rock cycle occurs:

Each student starts at one area. At each area is a die that the student should role to determine what path they should take. It is possible for the student to remain at the same station for a long time.  To alleviate frustration, I thereby stated that after 3 turns the student could go to another station.

While at each station and while moving to the different stations, students must record what is happening. For example,

Students continued to work through the rock cycle for several minutes (until the majority had cycled through 12 steps).

Try it yourself! Download the student handouts and station cards .. Rock Cycle Journey.