As a part of our current unit study, we discussed the geology and soil composition of Africa.  Most of African soils are volcanic, meaning they are formed from rocks and ash that have been blasted out of volcanoes.  These soils are particularly rich in minerals.  Minerals are freed from rocks through erosion.

Depending upon the steepness of the slope, the kind of soil, and the amount of vegetation, different amounts of water soak into the soil.  After the water soaks into the soil, plant roots make good use of it.  If the soil is porous, some of the water continues downward until it accumulates in aquifers or underground rivers.

In the dry areas of Africa, there is usually too little vegetation to break the fall of rain.  During the wet season downpours, raindrops smash onto the bare soil, loosen particles, and carry them off the land, along depressions, down little gullies and into creeks and rivers.  Soil erosion is a huge problem in Africa and has been for a long time.  The accumulation of silt at river mouths can be a mile thick.

Over time, the chemical composition of soil may change as animals add their feces to the soil.  Soil can also move vast distances by the action of rivers.  The Nile River carries soil along its 4,000 mile length from the Ethiopian mountains and the East African highlands through Egypt to the Mediterranean Sea.  As the river water flows into the sea, soil particles settle and produce a great mudflat – a delta – spreading out from the river’s mouth.  Because the soils of the Nile Delta were so fertile, agriculture flourished as long as 12,000 B.C. and became the basis of the ancient Egyptian civilization. 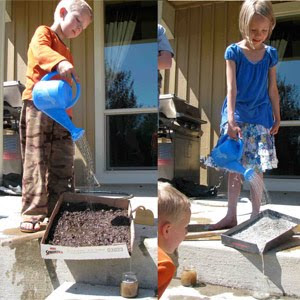 Question :: How does soil type affect the amount of runoff ?

Hypothesis ::  Each of the kids described what they expected to happen.  All were in agreement that they expected the sand to runoff the fastest, then clay and finally dirt.  Additionally, they all predicted that the grass roots would hold in the soil and absorb the most water, resulting in the least amount of runoff. 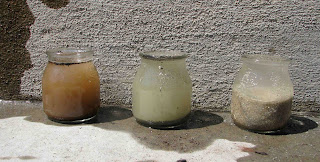 As the rain fell upon our ‘land’, we observed the formation of rivers, canyons and even waterfalls.

As we discussed the results of our experiment – comparing the water turbidity / clarity in the jars and the amount of sediment – we also made note of things that could have affected the outcome and made a list.