Imagine for a moment, it is the year 1844 and you’re walking down Broad Street in the small coastal town of Lyme Regis on the southern shore of England. Your eyes are drawn to a window of a cottage. Treasures lay on the other side of the glass: coiled ammonite shells long since turned to stone, sea shells carefully arranged in a pattern, and in the center sits the petrified skull of a long-snouted sea reptile with pointed teeth and huge eyes. A sign above the door reads Anning’s Fossil Depot.

This small shop of curiosities was owned by a remarkable woman of her time, Mary Anning. She spent her life collecting the Jurassic-era fossils displayed throughout the small shop, simultaneously providing for her family and unlocking the secrets of Lyme Regis’s ancient past. Today, her shop is a museum. 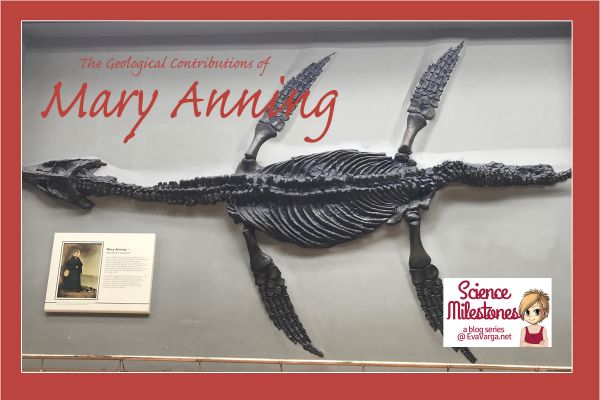 Born into poverty in a society famed for its class consciousness, the savvy businesswoman defied the odds to become one of the world’s most important scientific figures.

Paleontologist Mary Anning was an impressive fossil hunter who discovered the first articulated plesiosaur and was among the first to identify fossilized poop or coprolite. However, like many females scientists, her male contemporaries had a frustrating way of swiping credit from her.

Born on the 21st of May 1799, Mary Anning was an English fossil collector and paleontologist. She became known around the world for important finds she made in the fossil beds along the seaside cliffs of the English Channel at Lyme Regis in Southwest England. Her findings contributed to important changes in scientific thinking about prehistoric life and the history of the Earth.

By the late 18th century, Lyme Regis had become a popular seaside resort and many locals supplemented their income by selling what were called “curios” to visitors. These were fossils with colorful local names such as “snake-stones” (ammonites), “devil’s fingers” (belemnites), and “verteberries” (vertebrae). Fossil collecting was a hobby shared by many and it gradually transformed into a science as the importance of fossils to geology and biology was understood.

Her father was a cabinetmaker who supplemented his income by mining the coastal cliff-side fossil beds near the town, and selling his finds to tourists. He married Mary “Molly” Moore in 1793 and together had ten children, though only Mary and one brother, Joseph, survived to adulthood. Their father, Richard, often took Mary and Joseph on fossil-hunting expeditions. Mary continued to support herself through fossil hunting as she grew older.

While scouring the beach in early December 1823, she came upon a fossilized skull that was like nothing she’d seen before. The majority of the skulls she had previously found belonged to Icthyosaurs; they were long and narrow, a bit like the heads of dolphins or crocodiles.

This skull, on the other hand, was small, beady-eyed, and had a mouthful of strange, needle-shaped teeth. Calling upon nearby villagers for assistance, Anning carefully unearthed the rest of the mystery creature’s body. Attached to a stout torso and broad pelvis were four flippers and a diminutive tail. The long neck was the most peculiar feature, however, accounting for nearly half of the 9-foot creature’s length.

She wrote to a colleague describing her discovery (see a page from her letter below) and her place in the scientific community was sealed, though many of her peers were initially skeptical. In fact, at a Geological Society of London meeting the following year, Reverend William Conybeare (a fellow paleontologist) stole the show with a well-received presentation on the nearly complete Plesiosaurus from Lyme Regis. He also published a paper featuring detailed original illustrations of the specimen. However, neither his presentation nor his paper mentioned Anning and he initially stole credit for the discovery.

Over time, Anning’s discoveries became key pieces of evidence for extinction. Her work also became well known in literary circles as well; Charles Dickens wrote of his admiration of her 18 years after her passing. Legend has it the children’s rhyme, “She Sells Seashells”, is also a tribute to her work:

Anning died from breast cancer at the age of 47 on the 9th of March 1847. Admirably, when the Geologic Society learned of her diagnosis, its members began raising money to cover her medical expenses. Later, her funeral was paid for by the society which also financed a stained-glass window dedicated to her memory that now sits at St. Michael’s Parish Church in Lyme Regis.

Nature journals are as valuable a learning tool today as they were in earlier centuries. The image below comes from a letter written in 1823 by Mary Anning describing her discovery of what would be identified as a Plesiosaurus. 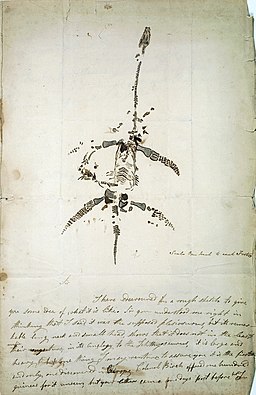 Visit a local natural history museum and create a nature journal entry on one of the specimens on display. Inquire with the staff about the process and care involved in curating skeletal specimens.

Participate in a fossil walk.

Begin your own collection of fossils.

If possible, visit the Natural History Museum in London or the museum in Lyme Regis.  We recently had this opportunity when we traveled to England in 2017. Here you can learn more about the pioneering work of Mary Anning and see some of the most complete fossils of prehistoric sea animals, including ichthyosaurs and plesiosaurs. Plus, look out for the skeleton cast of the giant ground sloth, a land mammal often mistaken for a dinosaur.

Novelist Tracy Chevalier (author of The Girl with the Pearl Earring) has made a career of bringing history to life. Chevalier’s newest novel is called Remarkable Creatures centers around the life of Mary Anning. The novel introduces readers to Mary’s unlikely champion, Elizabeth Philpot, a middle-class woman who shares her passion for scouring the beaches. Their relationship strikes a delicate balance between fierce loyalty, mutual appreciation, and barely suppressed envy, but ultimately turns out to be their greatest asset. Based on real characters, I found the story interesting. I was moved to realize just how difficult it must have been to persevere with the social obstacles she encountered in her time.