I don’t have as many photos today due to the fact that I was feeling a little overwhelmed. Things didn’t go quite as smoothly as I had hoped. The problem was that a few of the activities were a little too difficult for the younger kids and I didn’t have enough adult volunteers to help assure that the kids had assistance when necessary. This, of course, led some to get a little wiggly and I had to make a few last minute adjustments. All in all, though, the kids had a good time.

I began by reading a chapter from Pippi Longstocking. I had failed to take into consideration that some may not be accustomed to listening to longer stories from chapter books and before I knew it, the wiggles began. I started skipping paragraphs but the story didn’t flow as well and I started second guessing myself. 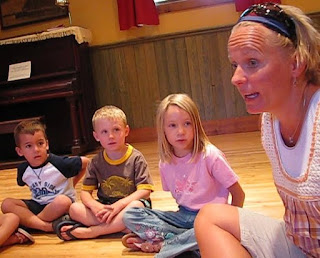 While I was reading, Shanette arrived and took a few minutes to set up a few weaving looms that she brought with her. When she was ready, we got up from the floor to get the wigglies out and then formed a circle as Shanette led us through a game in both English and Norwegian. (I’ll have to ask her to write out the words so that we can practice.)

The children were very attentive throughout the game. When we were finished, we moved back to the tables where I began a Aurora Borealis (Northern Lights) crayon resist activity whereby the kids were to draw a landscape with crayons and then we’d add a black watercolor wash for the night sky. I didn’t anticipate that this too, would be difficult. A few of the younger ones stated, “This is too hard. Can you do it for me?” They didn’t put much effort into it and I was thereby disappointed. During this activity, Shanette had had to leave – I didn’t even realize it until I looked around to ask for help and couldn’t find her.

The kids then began to squirm and run about in the open space. I tried to get snack started in the kitchen – the plan was to go in rounds and make abelskivers but as the first small group got started, I knew this wasn’t going to work. Thankfully, I had on hand the fattigmandbakkelse (cookies) I had planned to use on Thursday, so I used those instead. Shanette returned as I was handing out cookies and everything started to smooth out once again. 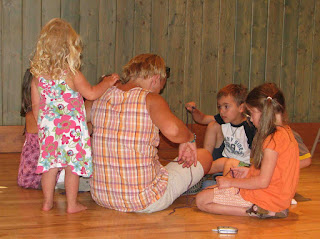 After snack, Shanette sang a Norwegian rhyme to divide the kids into smaller groups. A few went with her to do finger weaving, a few with Christian (her nephew) to do loom weaving and a few with me to make the heart woven baskets.

All the kids with Shanette and Christian were at task. The younger ones with me, however, were not. Though we were using felt (which was more maneuverable and didn’t tear as easily as paper), the kids had difficulty following the directions. This is partially due to the fact that everytime I gave a direction, they squirmed about and had their eyes on the other groups. I had to repeat the same directions over and over… those that had got it the first time, hearing the directions repeated, thought I meant for them and they’d proceed forth. This caused a succession of goofs and I felt like a failure.

Fortunately, moms arrived shortly thereafter and kids began to disperse. I took deep breath, vented my frustration, and re-evaluated my plan for the following two days.