My daughter loves the film writer and director Hayao Miyazaki of Studio Ghibli. One of her favorite movies he has created is Princess Mononoke, a 1997 Japanese animated historical fantasy feature film. Princess Mononoke is a period drama set specifically in the late Muromachi period of Japan but with numerous fantastic elements, and concentrates on the struggle between the supernatural guardians of a forest and the humans who consume its resources as seen by the outsider Ashitaka. 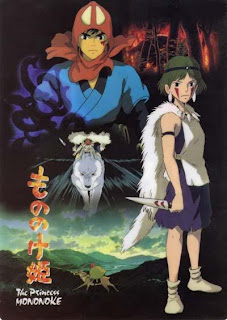 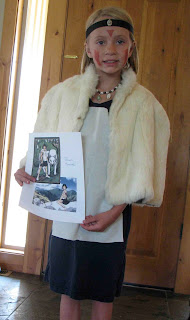 When the girls next door decided to celebrate Halloween in the Summer (now a tradition in our neighborhood, this was the 3rd year) .. my daughter wanted a unique costume.  When she said, “I want to be San from the movie Princess Mononoke,” I was apprehensive as we only had a few hours prior to prepare.  We didn’t have a lot of time to invest and I didn’t want to disappoint her.  Fortunately, we were able to create this one relatively easily with an old t-shirt of her dad’s (blue), a pillow case (white), my fur stole, and a few cowrie shells (for the necklace & headband).

Not surprisingly, the other children were not familiar with the movie.  Only a few had even seen a movie by Miyazaki … can you guess which one it might be? … let alone this one from 1997.  We thereby printed a couple of pictures so that she could share.  Her costume was certainly the most unique … just like her.  She was so delighted in their response that she has requested to where it again on October 31st, “with some improvements.”