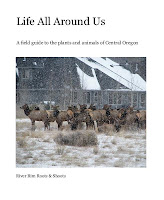 I live in a subdivision with a large, open meadow surrounding a pond.  Back in the spring of 2008, the kids in my Roots & Shoots club spent an afternoon illustrating some of the plants and animals that are common to this area.   As the kids worked diligently, inspiration struck … Why don’t we create a field guide to the flora & fauna of our subdivision?

I encouraged them to draw several more animals so that the book would be more comprehensive.  I then scanned in all their images and asked many of the older students to write a few facts about each.  As many of our members were very young and were not yet writing … some children exhibited only one drawing while a small few had several illustrations and accompanying text.  For the pictures that lacked written information, I supplied it myself.  I then utilized Blurb.com to publish the book. Our intention was to sell copies to our neighbors as a fund-raiser, but one book was just under $20 so we forgo that idea.

Yet, their illustrations were so good … I needed to find a way to share them with our community.  Late in year, I recalled the interpretive sign projects I had done with my students when I was teaching in the public school.  At the time, we used grant money to fun the construction of the signs but my vision was to ask each homeowner to donate just one dollar to the project.  I was confidant we would succeed if all the members pulled together. 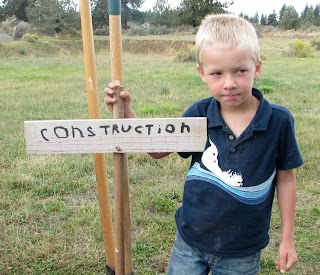 In the spring of 2009, I asked each of the parents to canvas their loop within the subdivision … ensuring we would each speak to the neighbors we knew best.  To my chagrin, no one was willing to do this but each family whose child’s artwork was featured contributed $20.  We were thereby able to pay for the initial part of the sign to be done … putting the children’s artwork onto the plastic weather-resistant board. [Admin Note :: We saved a significant amount of money because I was able to do all the graphics work.]  Raising the remaining funds to frame the board and thereby erect the sign in the meadow was left up to me.

As I began to go door to door, the farther away from my own home I worked, the less inclined the residents were to support the project.  Even though my kiddos accompanied me and I had sample photographs, they weren’t certain what to think of me.  This was going to be impossible, I realized, so I didn’t even finish my loop.  Instead, I decided to present the project at an HOA meeting. 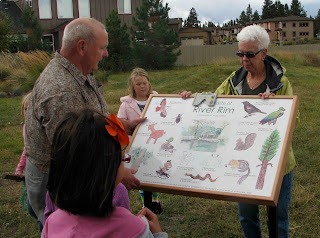 I brought the sign to an HOA meeting in November ’09 … and upon request, also submitted a letter of request to the our HOA quarterly newsletter.  Mistakenly, though they had my letter on hand, it wasn’t included in the newsletter that came out in January.  We thereby had to wait for the next issue in March 2010.  The months that followed were very humbling … I received a small handful of letters from residents within the community that wanted to support our project.  These donations doubled what we had been able to collect previously but were still not quite enough.  I was beginning to think the project was going to come to a dead-end.

Then from out of the blue, I received a phone call from one of the guys on the finance committee. He inquired about our progress and about how much the project was estimated to cost.  Since we first began to pursue this, I had learned that the framing portion was going to be significantly more than they had anticipated.  My contact guy at the sign manufacturer had actually delayed getting back to me for a couple of weeks as he didn’t want to disappoint me.  I demurely explained this to the finance guy in hopes we could brainstorm alternatives means of fundraising.  To me delight and surprise, however, he informed me that the committee had agreed to fund whatever amount we were short (with a maximum of $250).   Thankfully, it was just enough! 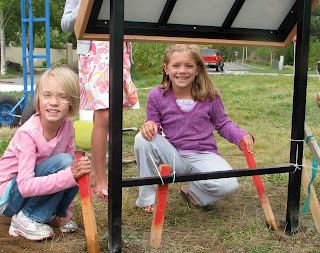 The framing was completed in the middle of the summer 2010 and for several months it rested in my den as I worked to coordinate all the necessary parties.  This was proving to be a nightmare so I finally just picked a date.  In retrospect, I should have done this earlier because everything began to fall into place.

The landscape maintenance company was able to meet with me to determine the best location to erect the sign; a neighbor on the open space committee agreed to meet us with cement, a friend of mine lent me a post-hole digger; and another mom brought brownies to share!

I am so, so excited to see this project through.  It took more than 2 years and nearly $500 ~ but it is a life-time achievement of which we can all be proud.