Have you ever played Norwegian Bingo? How about Hnefatafl? Or Kubb? Not only are these Norwegian games fun for all ages, they also provide a great opportunity to teach children about Norwegian culture. With three different games or spill to choose from, you’re sure to find something everyone will enjoy. 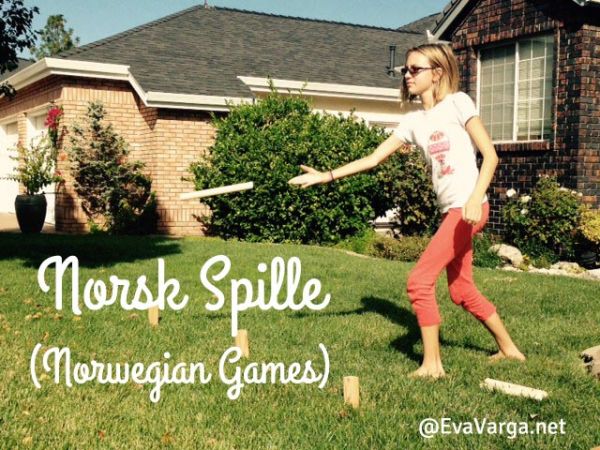 Calling out the numbers in Norwegian—one (ehn), two (tooh), three (treh)—gives this familiar game a little Norwegian flair. It’s also a fun way to teach Norwegian counting. Five in a row makes ‘Bingo!’ Using a pencil and ruler, help your child draw a grid on a sheet of paper to make the Bingo board. Number the grid and use coins as game pieces. Ready to practice the Norwegian alphabet? Instead of numbering your Bingo board, write and call out Norwegian letters—a (ah), b (beh), and so on.

Hnefatafl (pronounced NEF-uh-tahf-ahl), is one of the oldest games in the world (traced in various versions to the Vikings, Welsh, Saxons, and Irish) and is similar to chess. The Vikings played this game to sharpen their minds for battle. The goal is to capture your opponent’s pieces before the ‘king’ reaches safety.

Also known as The Viking Game, The King’s Table or simply Tafl, is one of the rare breed of games with two unequal sides. The defending side comprises twelve soldiers and a king, who start the game in a cross formation in the center of the board. Their objective is for the king to escape by reaching any of the four corner squares. The attackers comprise 24 soldiers positioned in four groups of 6 around the perimeter of the board. All pieces move like the Rook in chess and pieces are taken by “sandwiching” (i.e. moving your piece so that an opponent’s piece is trapped horizontally or vertically between two of yours).

You can purchase a Hnefatafl Tournament Set

as shown here online or at a specialty game store.

Kübb, (pronounced KOOB) is a Viking lawn game that is played with three types of wooden pieces: kubbs, batons, and a king. Using your batons, the point of the game is to knock down the other team’s kubbs, and finally the king. Challenge your children to a one-on-one game, or get the whole family involved. Kübb can be played with two teams of up to six people.

If you or your child enjoy woodworking, consider making a Kübb set for yourself or as gifts. Alternatively, you can purchase a pre-made Triumph Sports Wooden Kubb Set

For an instructional video, watch Justin Ross explain How to Play Kübb on YouTube. Kübb is a game for all ages and skill levels. For information about national competitions, be sure to check out the US National Kübb Championship’s website.

For more details on each of these games, subscribe to my newsletter for a free eBook, Norsk Spille (Norwegian Games). It is available for Subscriber’s Only.