A Norwegian Christmas is filled with many celebrations and traditions, old and new. As the snow falls, the white landscape is the first sign of Christmas and Norwegians start to prepare for their long season of juletid (Christmas time), a celebration of traditions and family in Norway. With the fall of winter snow and the wonderful displays of Northern Lights, Norwegians sit around their fire places, dance around the Christmas tree on Christmas eve, enjoy rich food, and share julefryd (Christmas cheer). As this special time of year approaches, I am happy to share our Norwegian Christmas with you.  I hope you will celebrate with us by having a little bit of Norway in your Christmas. 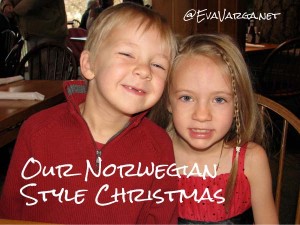 Guests in our home during the holidays will not always pick up on the traditions we have come to incorporate into your Christmas holiday.  At first glance, there are many similarities between Scandinavian and American Christmas traditions.  Look closer, however, and you will begin to see the little touches that speak to our ancestry and love of Norway.

A more recent tradition is the Advent Calendar, a tradition borrowed from Germany. Starting on the 1st of December, they are used to count down the days to Christmas. that starts a countdown from the 1st of December to the 24th with little treats and sweets hidden in its pockets.  Wall hangings with doors or pockets are most common, however, there are also many modern varieties such as boxes with drawers, a string of mini stockings, or a hanging clothesline with pegs. In our home, the kids share a calendar of felt pockets we stitched together and they each have a special advent play set of their own (Sweetie is shown with her Playmobil Forest Winter Wonderland Advent Calendar 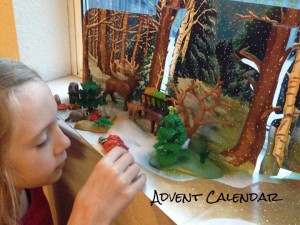 The Barn Elf (Fjøsnissen) is a creature from Scandinavian folklore. He was often described as a short man, “no bigger than a horse’s head”, wearing grey clothes, knickerbockers and a red hat similar to what Norwegian farmers would wear. As the name suggests, the Fjøsnisse lived in the barn. Of course, he was so shy that he was hardly ever seen, but he was a good little helper on the farm as long as the farmers treated him well. Especially at Christmas he would expect to get a large bowl of porridge and homebrewed beer, in return for looking after the livestock. Often the farmers would also leave the leftovers from Christmas dinner on the table so the Nisse could help himself. But if farmers failed to keep him fed and happy, the Nisse would create mischief.

Today, Norway also has the tradition of the Julenisse, which is a combined tradition of the fjøsnisse and the American Santa Claus. The Julenisse looks a lot like the Barn Elf  and visits the home on Christmas Eve with presents and the greeting “are there any good children here?”. Often he demands the children sing to him before they get their presents, and so everyone sings På Låven Sitter Nissen (In the Barn Sits the Elf). I have written a little about the Nisse in years past (The Nisse of Norway).

There are many traditional Scandinavian Christmas crafts. In fact, it is tradition in many communities around Norway to have Christmas workshops; a time where family and friends get together for a night (sometimes one night each week leading up to Christmas) to make gift cards, tree ornaments, and table decorations.  Each year, I have tried to incorporate more and more handmade decorations into our traditions and have invited Barnesklubb friends to join us on many occasions.  Christmas Crafts Scandinavian Style

is a great resource for ideas and easy to follow instructions for  Christmas crafts with a Norwegian flair.  Other traditional crafts include:

This year, I wanted to make Christmas decorations inspired by the Finnish traditional craft of Himmeli, an ornament made of straw that is hung from the ceiling at Christmas time. I wanted to keep it natural and simple by using straw and wooden beads.  We will be crafting these with Barnesklubb next week and I’ll share with you a quick tutorial then – you won’t want to miss it.  When complete, the small ornaments will hang on our Christmas tree but after Christmas, I imagine we’ll combine them into a larger ornament and hang it somewhere in the house. 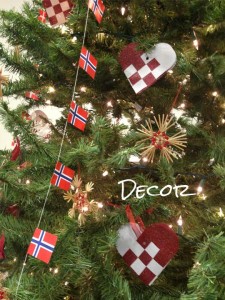 Decorating the whole house for Christmas is a big tradition in Norway.  No table is left alone, no window is left undressed and no sofa is left bare.  Christmas is an all-out decorative affair.  The German custom of having Christmas trees became common in Norway around 1900. In Norway most everyone has either a spruce or a pine tree in their living room – decorated with white lights, Norwegian flags

, and other hand-made ornaments for Christmas.

Lighting your own outdoor tree is a great way to put a little Norwegian into your Christmas.  To further celebrate the season, why not get the family together, hold hands and sing your favorite Christmas songs as you circle around the tree.  For an alternative, you might also consider decorating a tree for wildlife as we were inspired to do upon reading Eve Bunting’s book,  Night Tree.

Another fond memory of the season is the Saint Lucia parade at the lodge Christmas dinner.  Before dessert is served, the kids line up in the hallway – the girls donning white gowns with a sash and holding a candle (battery operated for the little ones) and the boys wear a cone shaped hat adorned with stars and hold a large glittery star on a pole.  A girl (generally the oldest) is chosen to represent Saint Lucia and wears a wreath of candles around her head (electric lights – for fire safety).  As everyone sings the Saint Lucia hymn, she leads the precession of children through the dining hall handing out treats – special Lussekatter (Lucia sweet bread/boller). 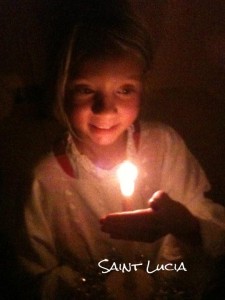 What is Juletid without Lefse and Norwegian cookies? I know not.  Since the kids were just toddlers, we have been gathering with the Sons of Norway lodge to make lefse together.  It has become a very special part of the season and we look forward to it every year.  In gathering, we also take part in a cookie exchange – baking our favorite recipes and discovering new ones.  I am saddened, however, that the lodge was unable to gather this year.  Illnesses and the loss of members who have passed have begun to take their toll.

I am disheartened and fearful. I don’t know what the future holds for fraternal organizations like Sons of Norway.  Society is indeed changing.  People are increasing busy – or at least they perceive themselves to be.  Regardless, I know that at least in our home, I will continue to incorporate little things that make the holidays special, little reminders of our ancestors and the culture of our heritage. 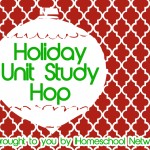 This post is part of a Holiday Unit Study Hop hosted by the iHomeschool Network.

11 comments on “Our Norwegian Christmas”