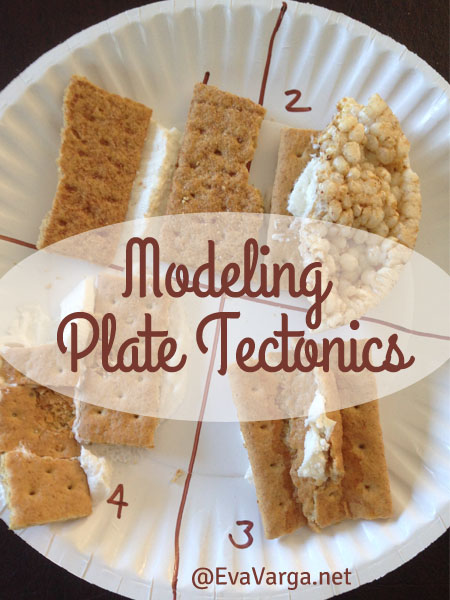 The theory of plate tectonics provides geology with a comprehensive theory that explains how the Earth works. Though Alfred Wegener was the first to suggest the theory of continental drift and plate tectonics in 1915, it wasn’t widely accepted until the 1960s and 1970s as new information was obtained about the nature of the ocean floor, Earth’s magnetism, the distribution of volcanoes and earthquakes, the flow of heat from Earth’s interior, and the worldwide distribution of plant and animal fossils.

These plates are all moving in different directions and at different speeds (from 2 cm to 10 cm per year–about the speed at which your fingernails grow) in relationship to each other atop the hot plastic upper mantle, known as the asthenosphere. These plates are in motion as a result of convection in the asthenosphere, creating a variety of interactions at the plate boundaries. At the plate boundaries, plates may converge (collide), diverge (separate), or slide past each other (transform boundary).  In addition, some plates may appear to be inactive.

In this simple activity, students will model each of the different types of interactions at plate boundaries. Each pair of students will need the following materials:

Procedure
1.  Divide your plate into four sections with a marker
2.  Place a dollop of frosting in each quadrant
3.  Lay the two pieces of graham cracker side by side on top of the frosting so they are touching.
4.  To imitate the result of diverging oceanic plates, press down on the crackers as you slowly pull apart in opposite directions.

Think About It
1.  What do the graham crackers represent?
2.  What does the frosting represent?
3.  What happened to the frosting between the crackers?
4.  Name a specific location on the Earth where this kind of boundary activity takes place.
5.  What type of feature is produced by this movement?
6.  What is the process called that creates new ocean floor from diverging plates?

Procedure
1.  Take another graham cracker (to represent the thin but dense oceanic plate) and lay it next to a rice cake (to represent the thicker but less dense continental plate) so they are almost touching, end to end.
2.  Push the two “plates” slowly toward each other and observe which plate rides up over the other. On the actual surface of the Earth, the oceanic plate is subducted.

Think About It
1.  Why does the oceanic plate sink beneath the continental plate?
2.  Name a specific location on the Earth where this kind of boundary activity takes place.  Look at the attached plate tectonics diagram for help.
3.  What features are formed on the continent along this boundary?
4.  What feature is formed in the ocean along the subduction zone? 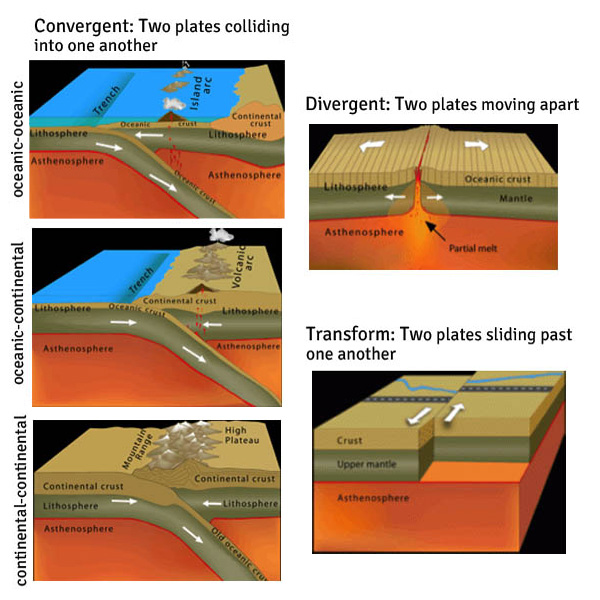 Procedure
1. Take two new graham crackers. Each piece of graham cracker represents a continental plate.
2. Dip one end of each of the two graham crackers into a cup of water. Don’t wait too long or they will fall apart.
3. Immediately remove the crackers and lay them end to end on the frosting with the wet edges nearly touching.
4. Slowly push the two crackers together.

Think About It
1. What happens to the wet ends of the graham crackers?
2. What feature do the resulting ends of the wet crackers represent?
3. Name a specific location on the Earth where this type of boundary activity takes place. Look at the plate tectonics diagram for help.

* If you do this correctly, the cracker should hold while you increase the push-pull pressure, but will finally break from the opposite forces. We found this one the most difficult to model accurately.

Think About It
1. Name a specific location on the Earth where this type of boundary activity takes place. Look at the attached plate tectonics diagram for help.
2. Nothing happens at the beginning, but as the pressure is increased, the crackers finally break. What do we call the breaking and vibrating of the Earth’s crust?
3. Why do you think Earthquakes typically occur in California and not in the midwest?