My kids first discovered Minecraft a few years ago. At first, I didn’t see what was so fascinating about these pixelated worlds but the more they got pulled into the game the more I realized its full potential.

Together, my kids and I have learned so much as a result of this incredible game. This ultimate guide to Minecraft gathers the wisdom of homeschool bloggers like myself who have welcomed the learning opportunities this game provides. 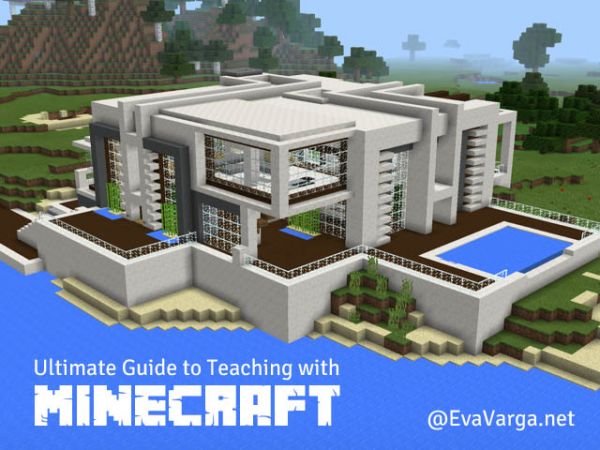 It began three years ago when we returned home from a field trip to the Shasta Dam near Redding, California. My son took it upon himself to build an elaborate model of the dam inside Minecraft. It was then that I really understood.

Minecraft is available on multiple platforms. While we have both PC (computer based) and PE (pocket edition), my kids prefer PE which they play on their iPad. There is also a version for X-Box and PlayStation.

While Minecraft has been an creative outlet for both of my children, my son has been the most captivated by the creative worlds and gaming aspects. Since the beginning, Jeffrey has been most interested in the creative mode – one of two options players can choose. Occasionally he would play in the survival mode, battling zombies and creepers, but what he most enjoyed was building elaborate models of airplanes, private yachts, and designing modern homes for the rich and famous owners of these expensive modes of transportation.

Would you be surprised to learn that the theme he selected for his Cover Story magazine is “Lifestyles of the Rich”? More details to come soon.

I am continually amazed at the creativity of kids. The following links provide examples of how Minecraft can be used as tool to create interactive projects that showcase what students are learning in a variety of subjects.

Building an Interactive History Museum in Minecraft – Our friend Marianna created an elaborate exhibit to showcase the life of Susan B. Anthony, bringing to pixelated life the house she was born in, her childhood school room, statues of Susan’s family, voting booths, the meeting room where the International Council of Women met, and more!

Using Minecraft for Homeschool History and Science Lessons – Ticia shares a variety of ideas for using Minecraft in history and science. “Imagine the enthusiasm your child will have when you say, “Now go build the Hanging Gardens of Babylon.””

Students may also be interested in using a 3D printer to create actual models they can hold in their hands, 3D Printing with Minecraft. 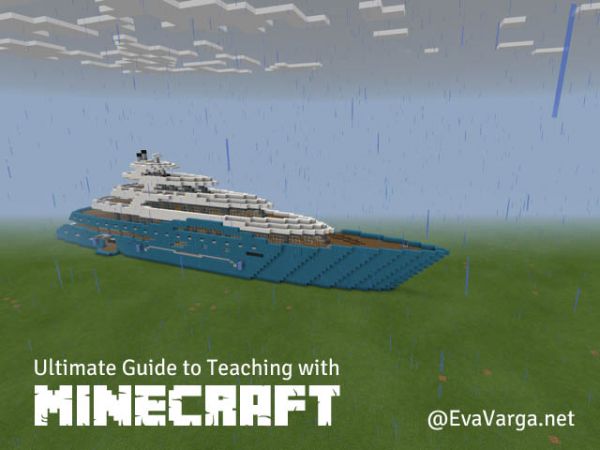 As Jeffrey’s building skills progressed, he began to play on other servers. Initially homeschool servers with parent moderators overseeing the content of the chat, but soon he was joining servers with players all over the world. Little did I realize that he would soon want a server of his own.

His first server was hosted on LEET where he could host up to 5 players. There were several plugins to change game play (warps, ranks, etc.) which were installed with just a tap. With this server he learned how to create mini-games (games players can engage in within the Minecraft platform). His server became very popular and was listed on their featured list.

As other players made donations to offset the hosting fees – he added more plugins and upgraded to a 40 player limit. He eventually left LEET, however, because he often experienced significant lag and downtime.

His server is now hosted on Netherbox which is not only more stable but also supports a much larger variety of plugins. With Netherbox, he also has access to the control panel and can thereby manipulate the java code of a desired plugin to better suit his objectives. He has thereby learned a great deal about java programming simply by trial and error and via online tutorials.

The customer service provided by Netherbox has been great. They respond to our queries in a timely manner and have always been helpful in troubleshooting.

With both server hosts, he has experienced hackers who have destroyed the span hub. He has had to continually rebuild and devote time to banning offending players. Yes – in the beginning he had been brought to tears. Each time, however, he vowed to not let the griefer get to him and his determination has never wavered.

I’ll build a better hub. I’ll learn from this and improve my skills. I want to host my own server so I can control the environment. I ban people if they use bad words or grief. I have a list of rules posted and if others want to play on my server, they agree to the rules.

As he became more interested in computer programming, I began to look for fun programming resources. I reached out to my friends at Piper and they recommended Youth Digital. 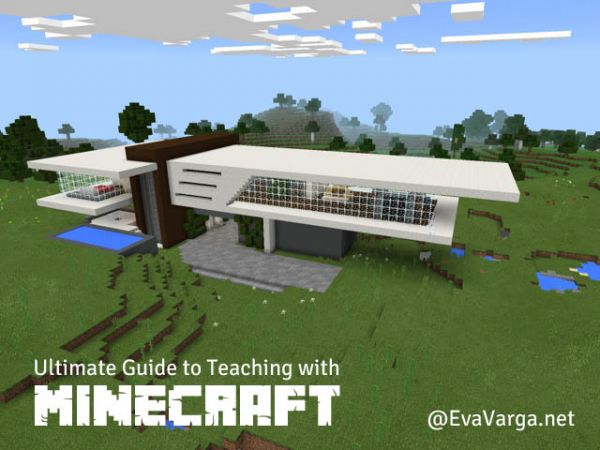 Nothing encourages fun learning more than connecting games to educational lessons. The creators at Youth Digital utilize the familiar gaming platform as a means to teach more in-depth computer science material including Java coding and animation. Here are a few opportunities for kids to learn new skills using a game they already love.

Youth Digital’s Server Design – Kids learn the basics of one of the most popular coding languages in the world as they modify real Java code to build their own Minecraft server.

Mod Design: Learn Java with Minecraft – A browser-based software program that teaches students how to mod the PC-version of Minecraft.

3D Character Animation – An exciting online course that teaches kids how to create animated movies using their favorite Minecraft characters with a focus on facial expressions and biped animation. 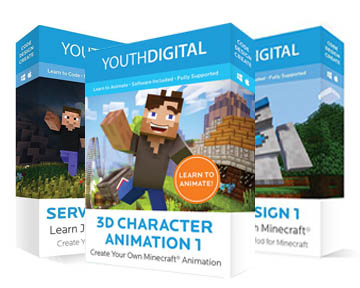 Other Learning Opportunities with Minecraft

The learning opportunities are not limited to activities within the gaming environment. Their passion for Minecraft often spills over into other areas of their life. Check out the projects of these wonderfully creative youth:

Erin shares her daughter’s ingenuity in creating a game to help her younger brother to Master Math Facts with Minecraft.

In her post, An Easy Sewing Project for Teens Who Love Minecraft, Megan shares a tower of adorable stuffs created by her daughter, Marianna.

Kids aren’t the only ones inspired by Mojang’s popular game. Check out these fabulous 2016 Minecraft Calendar / Planner Pages for Kids that Amy has created.

My son loved Amy’s ideas for a Minecraft Birthday Party and Minecraft Christmas Tree. We have printed off many of her printables and loved them all.

Amy has also created a delightful set of Minecraft Story Cubes you can incorporate use for creative writing and storytelling. “Throw the cubes into the air, see whatever topic appears, and then let your imagination take over.” 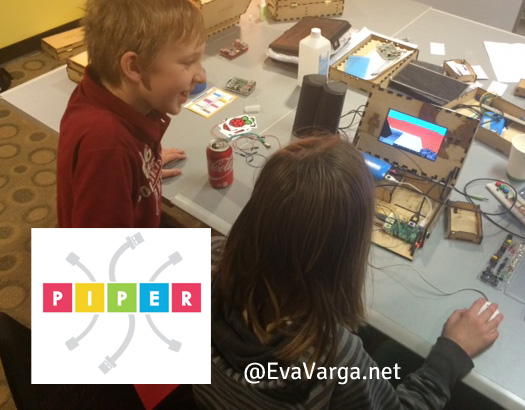 Other companies have caught on to the popularity as well. Piper has developed an ingenious Raspberry Pi based computer kit that teaches kids electronics, engineering, and computer programming by playing Minecraft; Learn With Piper: Coding, Computer Programming, & Electronics.

Skrafty is a full-featured gaming server designed specifically for homeschoolers that provides an online education site integrating the lessons with the game. They offer a wide variety of courses including a new Writing and Grammar Class with IEW coming this fall. Until then, you may want to print their Story Prompt Cube Printable.

Another full-featured gaming server is GamEd Academy. Their goal is to create a program for students age 6 to 16 that is regarded both for its academic excellence and for its contribution to joy-based learning. They offer both introductory and core courses designed to supplement or replace your existing curriculum. Check out all their course options in science, social studies, and language arts.

Every family has it’s own experiences and opinions about Minecraft. It can be a valuable teaching tool but as Sallie Boring stated in her post, “The game is highly-engaging, bordering on addictive.” Here are a few perspectives from other families and how they have tackled issues as they have arose.

Our Family’s Experience with Minecraft – Sallie provides a glimpse into her daughter’s interest in the game and the decisions they have made, “One choice we have deliberately made is to not turn Minecraft into school.”

Practical Lessons Kids are Learning from Minecraft – You won’t want to miss Susan’s post where she shares how the skills kids are learning are NOT limited to programming and game design/development.

Interested in exploring other topics? The bloggers at iHomeschool Network have collaborated to bring you a variety of Ultimate Guides.

I love books that feature diverse characters and e

Building relationships with students and their fam

For many years, I have been teaching online profes

@deadwanderings helped me to put together a custom

Welcome to Ellen’s Room, where I will soon be we

Let’s not forget their names. #sayhername Art b

I want to make sure my students have what they nee

I’m returning to the classroom this fall followi