“Roots creep underground everywhere and make a firm foundation. Shoots seem very weak, but to reach the light, they can break open brick walls. Imagine that the brick walls are all the problems we have inflicted on our planet. Hundreds of thousands of roots & shoots, hundreds of thousands of young people around the world, can break through these walls. We CAN change the world.”   ~ Dr. Jane

I first met Jane Goodall at an Oregon Science Teachers Association (OSTA) Convention in the fall of 1997. She greeted us with her infamous pant-hoot and spoke of her desire to see young people come together to make the world a better place.  I of course knew who Jane was .. but this was the first time I had heard of Roots & Shoots. Her message touched me that evening. I purchased her book, Reason for Hope, and as she signed my copy, I informed her that she had always been an inspiration to me but as of today, I would do my part as well.  I wanted to create a Roots & Shoots group of my own. 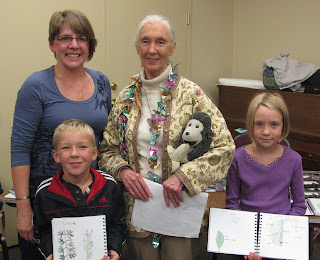 A dream fulfilled by my children, Oct 2011

I thereby returned to the classroom and immediately started an after-school Roots & Shoots group at one of the two elementary schools at which I worked. Twice a month, a group of students in grades 4-6th gathered in my classroom.  We engaged in a variety of activities and projects … each addressing one of the three goals of Roots & Shoots:  Care and Concern for Animals, Care and Concern for the Environment, and Care and Concern for the Community.  In the fall of 2000, we were invited to participate in a Roots & Shoots Summit in Seattle, Washington.  One student was able to join me … many were involved in sports or couldn’t afford the airfare (we had limited time to raise funds).   We spent the entire day with Roots & Shoots groups from all over the Pacific Northwest; sharing our projects with one another, networking, and listening to Dr. Jane share stories of what had inspired her as a young girl.  It was a wonderful experience for us both. 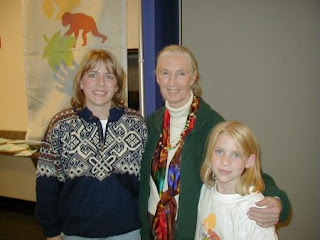 Meeting Dr. Jane for a second time with a student

Though I left the formal classroom setting when my daughter was born, I maintained my Roots & Shoots membership.  Shortly after my son was born in 2005, I had an opportunity to hear Dr. Jane talk again.  Her presence is so captivating … so at peace.  I knew it was time to again facilitate a group and I thereby started a group for preschoolers.  My children have thereby grown up with Roots & Shoots being an integral part of their lives.  I talk about Dr. Jane frequently and I love sharing her stories with the children.

Before we moved to Northern California, I had known that Dr. Jane was coming to Oregon.  Originally, I had planned to volunteer at the public lecture she was going to give in Bend … but with our move .. that plan changed.  However, I wasn’t going to allow an opportunity for my children to meet her to pass us by.  We thereby made the 7 hour drive to Salem for the Oregon Roots & Shoots Summit. 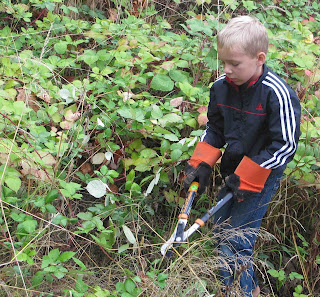 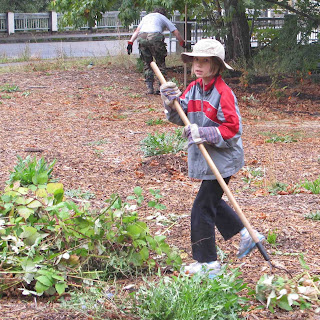 Raking the vines that others had clipped

We arrived in the morning and were thereby able to take part in a service learning project close to our hearts … stream bank restoration; removing invasive blackberry vines. In the afternoon, we took part in the giant peace dove parade and visited the booths of the other groups and several non-profits. 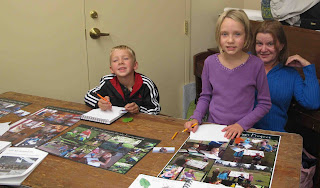 At our booth with Grandma awaiting Dr Jane’s arrival

We had a booth ourselves as well … we chose to exhibit photographs of our projects as well as our nature journals.  Several people showed an interest in how we undertook the interpretive sign project.  Everyone was impressed with the quality of the kids’ illustrations. 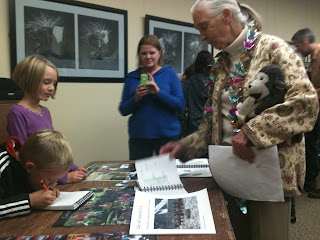 Dr. Jane arrives at our booth 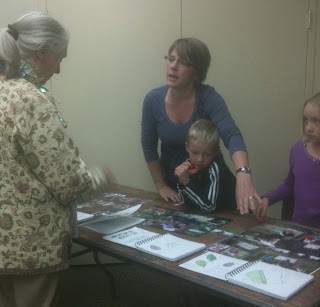 She posed for a picture with us and suggested the kids hold their journals for the photograph.  As she stepped away she remarked, “Your drawings look like those of an 18-year old.”  The kids were all smiles after that and remarkably, we soon had a small crowd of people curious about our work.