When the kids were toddlers, we used Love & Logic strategies and they worked like a charm. As the kids got older, we strayed and their behavior worsened.  Hubby & I recently revisited the philosophies of Love & Logic and have begun to re-implement the strategies we’d had such success with in the past.  In doing so, we have found harmony and peace in our home once more. 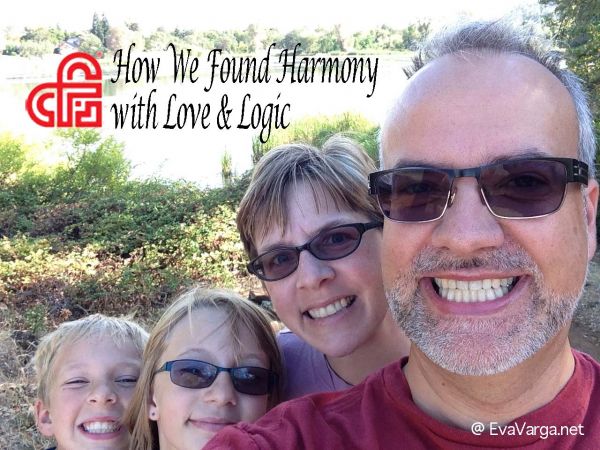 When the kids were toddlers, I had read Love and Logic Magic for Early Childhood: Practical Parenting From Birth to Six Years

.  This book was particularly helpful to me because I tend to react emotionally rather than logically. It offered practical steps really worked. The book emphasizes the value of children experiencing the natural consequences of their actions (logic) while simultaneously encouraging parents to empathize with their children prior to disciplining (love).

When I took a step back and reflected on my son’s behavior, I realized that I had become lazy.  I was not longer consistent and he began to react accordingly – testing and pushing the boundaries. While I had the skills, I had begun to let my emotions lead me.

to refresh my memory of the Love & Logic strategies that had worked so well in the past.   Upon applying just a couple of the skills outlined in this book, most notably ‘neutralize arguing’, I was able to remove the emotion and speak to my child with love, thereby allowing them to learn natural consequences of their behavior. Here are a couple of examples of how I implemented Love & Logic recently:

I wake to discover the little man was experimenting with cooking something or another.  There were drops of chocolate all over the kitchen floor from the microwave to the sink, a plastic bowl in sink with burnt chocolate encrusted around the rim and a gaping hole in the bottom, a puddle of chocolate and butter hardened on the bottom of the microwave, and Wilton chocolate candy melt bags strewn across the counter.

When the little man awoke, I greeted him warmly as usual. I asked if he slept well to which replied that he had. I asked if he stayed up late and did any experimenting in the kitchen. He gave me a wry grin. “How did it go?” I inquired.

“Not so good. I tried to make a chocolate bar but I didn’t use the right stuff.”

“Hmmm,” I responded. “What happened?”

“It got too hot and the bowl melted.”

“Anything else?” I asked.

“It dripped on the floor.”

“Well, you can hire me to do it for you. I am very experienced at cleaning up messes. I thereby charge for my expertise. You can pay me $2 to clean it up for you or you can clean it up yourself.”

“I understand. You have a choice, Sweetheart,” I explain. “You can do it yourself or you can pay someone else. Maybe your sister will charge less?”

“I suppose you could probably do some research or even ask someone with experience for suggestions.”

Kids were arguing one morning and the tensions were rising. I went into the room and calmly stated, “I’m going to charge you both $2 per minute to listen to you argue. I’m starting my stopwatch now.” I then walked away.

They each came to me and complained how the other had offended them. I repeated, “I charge $2 per minute to listen to you argue and to mediate.” The arguments stopped almost immediately.

A short time later, they could be heard helping one another rehearse and memorize their script for the living history event the following day.

I have recently enjoyed an on-demand webinar entitled, Success with Strong-Willed, Stubborn or Downright Defiant Kids.  This nearly four hour webinar provides a fantastic overview of proven strategies and skills for working with kids – particularly the middle and high school level child who has honed his own strategies for getting us to focus on things we can’t control.

Through the webinar, Charles Fay reviews the basics of the Love and Logic philosophy and then presents examples of and solutions to problems that we encounter so frequently as parents and teacher. Removing the threats and constant badgering and just letting him logically work out the consequences has had a much greater and faster impact than I could have imagined.

While I purchased the two books myself and have been using Love and Logic for years, access to the webinar was provided to me in exchange for my unbiased review.

3 comments on “How We Found Harmony with Love and Logic”