This past weekend, with our friends in town for the holiday weekend, we took advantage of the sunny skies to enjoy several outdoor adventures. For the kiddos and I, this was particularly educational as our excursions tied in very nicely to our current geology unit. We started with a short stop at Lava Butte whereby we drove to the scenic overlook atop the butte. We opted not to go into the visitor center as we actually have a Roots & Shoots and GEMS field trip planned there in June.

Lava Butte rises 500 feet above the surrounding area. The crater is 150 feet deep and was the site of fountains of molten rock erupting 6,160 years ago. The lava flow which breached the south side of the butte flowed west and north covering 6,100 acres of land. The flow blocked sections of the Deschutes River, forming Benham Falls, Dillon Falls, and Lava Island Falls. 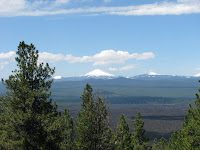 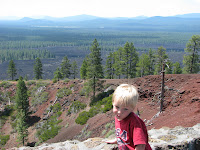 On the cone’s high side, the prevailing southwest winds deposited more cinders. There is more vegetation on this side because the snow stays longer on the north side and the finer cinders hold moisture longer for plant life. More than 400 cinder cones and fissure vents have been identified on the flanks of Newberry Volcano. Most of the cinder cones are well preserved owing to their high porosity and consequent absorption rather than runoff of water. 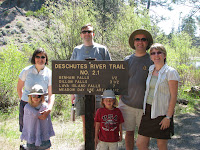 Of the three major waterfalls on the Deschutes River near Bend, Benham Falls is the only one easily and readily visible to visitors. Here, the Deschutes stairsteps over a series of small ledges as it flumes through a gorge. Unlike nearby Lava Island and Dillon Falls, Benham Falls isn’t surrounded by lava flows, but rather long-needle pine forest, which give it a much different feel than the two found farther downstream. 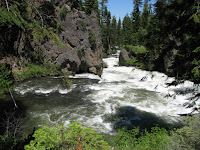 Benham has been cited as being the largest waterfall on the Deschutes River – a claim that may or may not stand up to testing. There are claims stating the falls drop 95 vertical feet in half of a linear mile, but the majority of this change in elevation is a long series of rapids. Approximately 25 feet of that drop constitute the legitimate cascading waterfall. 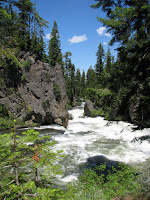 The hike along the Deschutes River to the falls is less than a mile and easy for children. We did not get started until nearly noon, so we opted not to continue farther to Dillon Falls. Ideally, we would like to return with our bikes to venture farther.