As a part of the Introductory Entomology course we are undertaking this month, we took advantage of the long weekend to do an insect survey in our backyard.  We headed out with a homemade transect device (four 1-meter length PVC tubes connected with L-joints to form a square) and a butterfly net.  We had high hopes that we would find a variety of insects as well as numerous different orders.  Be it due to time of day or season, this is not how it turned out.  Either way, we did make a discovery.

We had observed two very similar insects while undertaking our survey and it lead us to ask a number of questions.  Are they the same species?  Is one male and the other female?  What do they eat?  As we sketched and researched the answers to our questions, I was tickled to discover they were two distinct species … Milkweed (Lygaeus kalmii) and Western Boxelder (Boisea rubrolineata).  The majority of the bugs we observed were Milkweed bugs, I therefore share some of the facts we learned about them here.

Edited 26 Feb 2014 – I wonder now if some weren’t Bordered Plant (Largus succinctus).  I’ll have to take pictures and investigate this further. 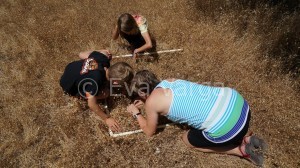 Milkweed and boxelder bugs are true bugs (order Hemiptera); beetles, moths, flies, and butterflies are not. Bugs have the usual complement of structures that they share with just about all other insects: six legs, three body parts (head, thorax, and abdomen), and two antennae. Hemiptera do not have mouths for biting and chewing food—they have a tubelike beak for sucking fluids. The milkweed and boxelder bugs suck nutrients from seeds. 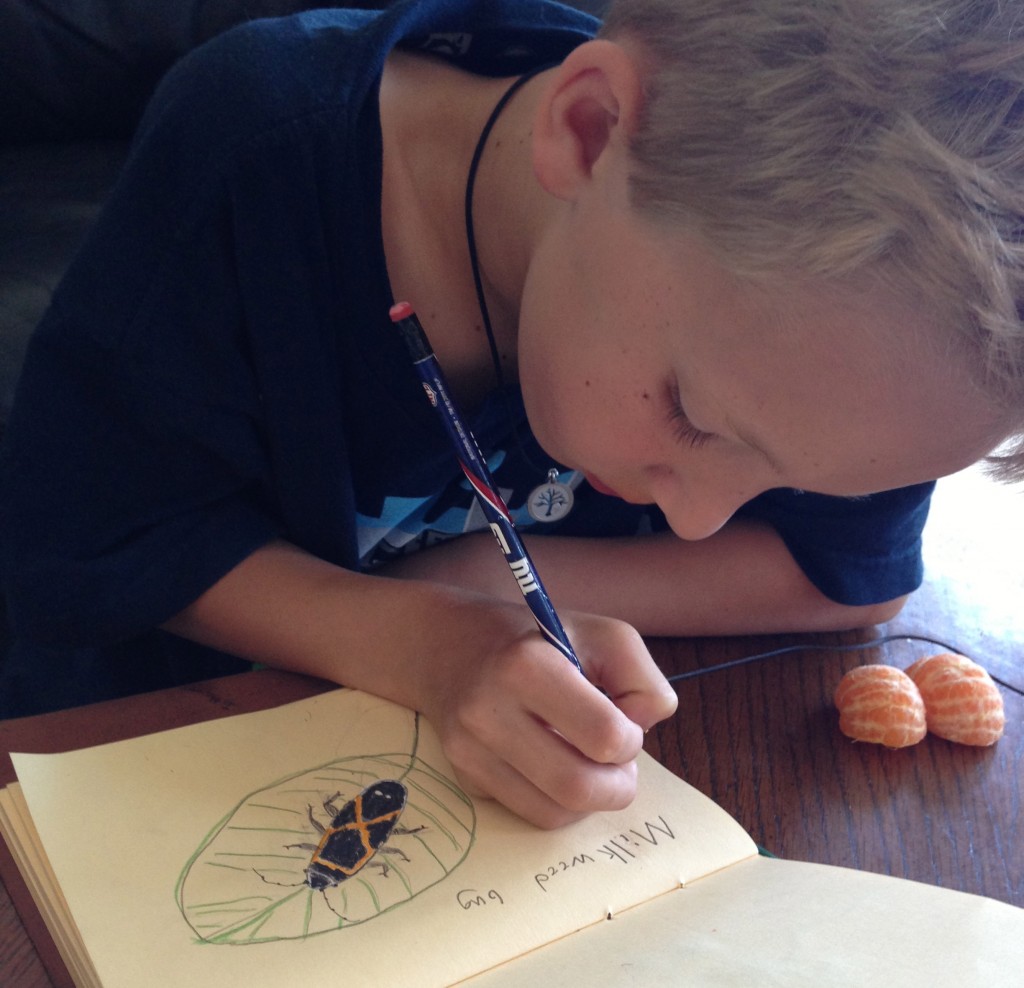 Hemiptera go through simple metamorphosis. The insect emerges from an egg looking like a tiny version of the adult, with slight differences in body proportions and incompletely developed wings. The immature bugs are called nymphs. As with all insects, in order to grow the nymphs must molt periodically. Just after molting the bug is creamy yellow with bright red legs and antennae. Within a few hours the body turns dark orange, and the legs and antennae resume their usual black color. 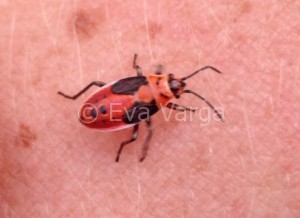 Hemiptera go through five nymphal stages (instars) as they mature. Each molt produces a larger nymph that is more completely developed. As they grow, the dark wings appear on the backs of the bugs as black spots. Other black markings start to appear and eventually develop into the characteristic patterns of black and orange. The last molt reveals the adult.

Milkweed bugs continue to feed as adults, inserting their long beaks into seeds to suck out oils and other nutrients. Mating is easily observed, as the two mating bugs remain attached end to end for an extended time. It is possible to distinguish female and male adults by body markings. Look on the ventral (belly) side of the bugs. The tip of the abdomen is black, followed by a solid orange segment (with tiny black dots at the edges). If the next two segments following the orange band have solid black bands, the bug is a male. However, if the segment following the orange band is orange in the middle, making it look like it has two large black spots on the sides, followed by a segment with a solid black band, the bug is female. Males tend to be smaller than females. 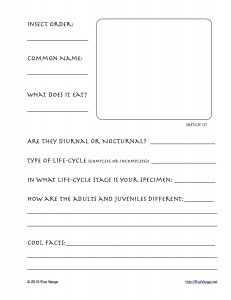 While our insect survey didn’t reveal the diversity we expected, we did enjoy the experience. We had selected four different sites – the grassy hillside behind our house, a rocky area, in the shade beneath the Oleaders, and in a drainage ditch.  We observed the greatest number and variety in the cooler areas.  The kids thereby made a hypothesis that they would see a greater number and variety in a cooler time of day or season.  We look forward to doing this activity again to test their theories.   I’ve created a free  insect order notebooking page for my valued readers.  Please feel free to pin it and share it with friends.

As the summer progresses, we look forward to doing additional insect surveys.  We have talked about also setting up a few pitfall traps and a Berlese funnel.  These collection devices, as shown in my Introductory Entomology Unit Study eBook, are bound to yield greater numbers of insects.