The plight of the honey bee and other pollinators is of concern to me.  Insect hotels or habitat for insects is the perfect project for our Roots & Shoots group to show care and concern for animals.  It was also a great introduction  to service learning for my STEM Club kids.  I thereby invited both groups to join us for a day of insect revelry.

I began by introducing the kids to the Mason bee, the common name for a species of bees in the genus Osmia, of the family Megachilidae (Blue Orchard and Hornfaced the best known species). They are so named for their habit of making compartments of mud in their nests, which are made in hollow reeds or holes in wood made by wood-boring insects.

Unlike honey bees (Apis) or bumblebees, Osmia are solitary; every female is fertile and makes her own nest, and there are no worker bees for these species. The bees emerge from their cocoons in the spring, with males the first to come out. They remain near the nests waiting for the females. When the females emerge, they mate. The males die, and the females begin provisioning their nests.

Osmia females like to nest in narrow holes or tubes, typically naturally occurring tubular cavities. Most commonly this means hollow twigs, but sometimes abandoned nests of wood-boring beetles or carpenter bees, or even snail shells. They do not excavate their own nests. The material used for the cell can be clay or chewed plant tissue. One species (Osmia avosetta) in the palearctic ecozone is known for lining the nest burrows with flower petals.

Females then visit flowers to gather pollen and nectar. Once enough provisions have been gathered, she backs into the hole and lays an egg. Then she creates a partition of “mud”, which doubles as the back of the next cell. The process continues until she has filled the cavity. Female-destined eggs are laid in the back of the nest, and male eggs towards the front. Once a bee has finished with a nest, she plugs the entrance to the tube, and then may seek out another nest location.

By summer, the larva has consumed all of its provisions and begins spinning a cocoon around itself and enters the pupal stage. The adult matures either in the fall or winter, hibernating inside its protective cocoon. Most Osmia species are found in places where the temperature drops below 0°C for long durations, like Canada, and they are well adapted to cold winters. 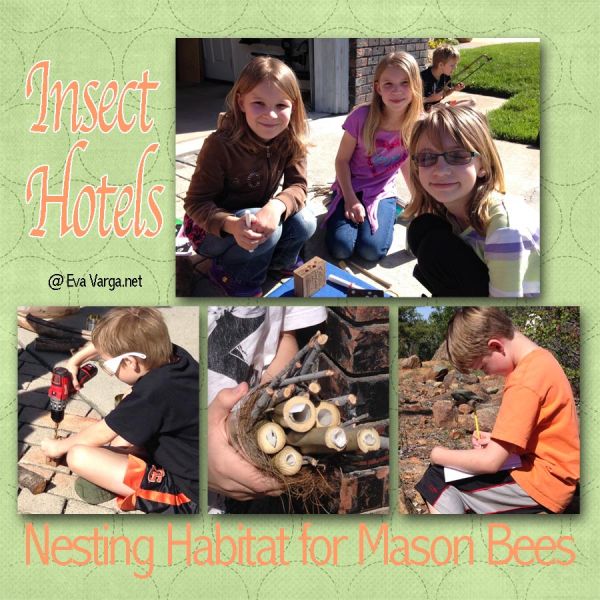 Build It & They Will Come

Maintaining Mason bee habitats or insect hotels can be a simple, yet powerful way for people of all ages to intimately connect with the awesomeness of nature. Mason bees don’t sting unless they’re squashed or squeezed so they’re kid and pet friendly and don’t require protective clothing or training to work with. Since they’re sociable but solitary, there’s no need to coax colonies into complex forms. A well-designed and well-built habitat with ample nearby pollen sources will naturally attract mason bees, can allow intimate year-round observation of their lifecycle, and especially for teachers, parents and community garden programs be a powerful real-world teaching tool.

Mason bees are increasingly cultivated to improve pollination for early spring flowers. They are used sometimes as an alternative, but more often alongside European honey bees. Most mason bees are readily attracted to nesting holes; reeds, paper tubes, or nesting trays. Drilled blocks of wood are an option, but do not allow one to harvest the bees, which is vital to control a build-up of pests.

I found the post, Housing Mason Bees at Bees, Birds, & Butterflies particularly useful as I researched the how-tos for building insect hotels.  You can also purchase pre-made insect hotels from a variety of sources.  For example, Esschert Design Bee House

. The kids had a great time building their own and it allowed their creativity to show.  Most of the kids recycled materials (soup cans, two liter bottles, etc.) to create a cylinder to hold bamboo and paper tubes. Many of the kids stated they wanted to build a wooden frame around their tubes and planned to finish their projects at home.

To help bees and other pollinating insects (butterflies) you should provide a range of plants that will offer a succession of flowers, pollen, and nectarthrough the whole growing season. Patches of foraging habitat can be created in many different locations, from backyards and school grounds to golf courses and city parks. Even a small area planted with the right flowers will be beneficial those with small yards shouldn’t hesitate to do their part.

Contact your local extension agency to learn what plants are native to your area.  You may also find useful fact sheets provided by The Xerces Society.