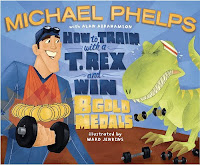 As is our modus operandi, we stumbled upon another gem at the library this last week, How to Train with a T.Rex and Win 8 Gold Medals by Michael Phelps (with Alan Abrahamson) and illustrated by Ward Jenkins. The colorful and humorous illustrations were what caught our eye. As an avid swimmer, that it was written by Michael Phelps encouraged me to bring it home. It did not disappoint!

Throughout the book Phelps puts his training into context for young readers. I read aloud, “For six years, from 1998 to 2003, I barely took a day off. I trained for six years.” Sweetie interrupted, “Wait! I want to do a math problem! She got up from the couch to get a pencil and scratch paper. She asked, “How many days are in a year again?” and proceeded to multiply 6 x 365 to discover that he trained for nearly 2190 consecutive days! Little did we know that Phelps would do something similar.

With every turn of the page, the large numbers he introduced were put into mathematical context. “Every week in practice I swam 60,000 meters. Over six years I racked up 12,480 miles. That’s like swimming from the full length of the Great Wall of China three times!” 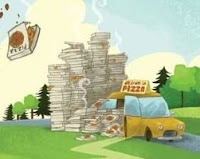 Jenkins’ delightful digital illustrations had us giggling with each new page as well. What I caught and pointed out to my peeps is that he used his children’s names (whom he dedicates the book to) within his artwork. They thought that was really cool! We also got a kick out of the fact that the illustrator is from Oregon! We’ll have to make suggestion to our librarians to feature it during the Oregon author & illustrator event they host each year.

Predictably, the message of the book was that if you work hard, dreams can come true. We recommend the book to everyone.