Tomorrow is International Children’s Book Day, a yearly event sponsored by the International Board on Books for Young People. Founded in 1967, the day is observed on or around Hans Christian Andersen’s birthday, April 2. Activities include writing competitions, announcements of book awards and events with authors of children’s literature. I’ve thereby chosen to share with you a number of activities and projects to honor Hans Christian Andersen.

Hans Christian Andersen was born in the town of Odense, Denmark, on Tuesday, April 2, 1805. Although a prolific writer of plays, travelogues, novels, and poems, Andersen is best remembered for his fairy tales which have been translated into more than 125 languages.  His tales present lessons of virtue and resilience in the face of adversity and thereby appeal to both children and mature readers. Some of his most famous fairy tales include The Little Mermaid, The Ugly Duckling, The Nightingale, The Emperor’s New Clothes and many more.

“Life itself is a most wondrous fairytale.” 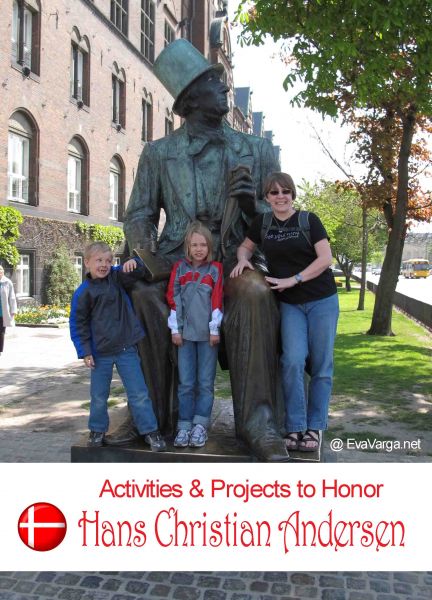 His stories have inspired plays, ballets, and both live action and animated films. Most recently, inspired by The Snow Queen, Walt Disney Animation Studios produced the computer-animated film, Frozen, released by Walt Disney Pictures in 2013.  The film has so far grossed $1.049 billion in worldwide box office revenue and has met with widespread critical acclaim, with several film critics considering it to be the best Disney animated musical since the studio’s renaissance era.

Those who love Hans Christian Andersen, however, know there is much more to him than his literary repertoire.  He was as equally gifted with the skill of Scherenschnitte as he was with words. He was also very fond of music.

Not surprisingly, statues and monuments in Andersen’s honor are found the world over.  The most famous statue based on a Hans Christian Andersen story is the Statue of the Little Mermaid in Copenhagen, Denmark. There is a statue of Hans Christian Andersen and the Ugly Duckling in Central Park in New York City. My favorite honorarium to Andersen (though I haven’t had the pleasure of seeing it in person) is in the Jesperhus Flower-park in Denmark. I think Andersen would have appreciated this memorial to him.

Hans Christian Andersen’s stories are without a doubt memorable.  Once you have read a book by Hans Christian Andersen, you remember it.  One of my favorites is Thumbeline – the feisty tiny girl who fights off toads and moles who want her for their own, and is able to find her way to marriage with a little flower-fairy prince who is perfect for her. Or who can forget the wise little boy in The Emperor’s New Clothes

who has the courage to point out what others could not, that the Emperor was not wearing invisible clothes, as the Emperor believed, but in fact was wearing no clothes.