Teddy Roosevelt once said that he was educated by traveling the world with trunks full of books that they brought on the ship as the crossed the Atlantic.  Sounds like a dream come true – to be have the means to travel and to be surrounded by books.

Though not everyone has the means to travel, through books you can luxuriate in the possibilities, swimming around in a place’s past, present, and future. How better to enrich the experience of travel than to immerse oneself in a the culture and history of your destination than through quality literature? 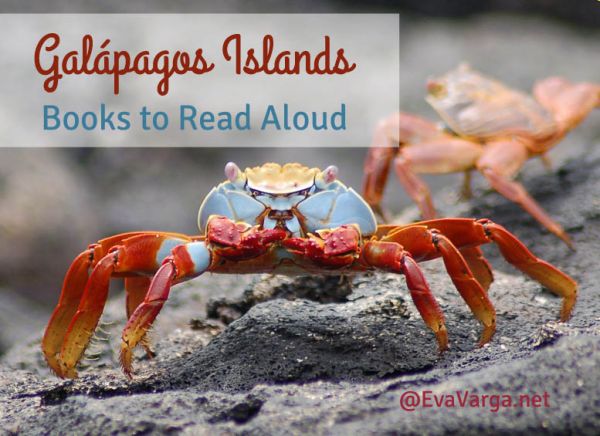 Reading aloud is widely recognized as the single most important activity leading to literacy acquisition.  Reading aloud not only builds vocabulary and literacy, but can also develops a child’s awareness and appreciation for global cultures.

If you enjoy reading aloud to your children as much as I do, why not choose books that might inspire them to go see the world? Here are some fun titles to consider that I selected in anticipation for our upcoming trip to the Galápagos Islands.

Island: A Story of the Galápagos

Island is above all a wonder-filled story of epic proportions. Jason Chin thrills the reader with the geological and biological processes that led to the Galápagos Islands we know today. He writes:

“…in order to create an engaging story, I have included events and details that are necessarily speculative. . . [but the] island formation, species colonization, and evolution described in this book are real. This story is based on science, but brought to life through my imagination…”

An Old Shell: Poems of the Galapagos

Johnston’s collection of poems records her observations during a trip to the Galápagos, which she characterizes as a place “wild and vast and stark, looking out over the endless and shining sea.” All the poems are short and the black and white illustrations are perfect. She uses a variety of poetry style – rhyming couplets, blank verse, and haiku – to recount her experiences in the islands.  What I like best about this book is that it provides children with the encouragement to think about and write about their natural world.

Jean Craighead George is one of my most beloved children’s authors and is best known for the My Side of the Mountain trilogy and Julie of the Wolves.  Galápagos George introduces children to the wonders of the natural world in this incredible evolution story set in the Galápagos Islands. Like many of her non-fiction works, it also features key terms, a timeline, and further resources for research.

This is the story of the famous Lonesome George, a giant tortoise who was the last of his species, lived to be one hundred years old, and became known as the rarest creature in the world. His story gives us a glimpse of the amazing creatures inhabiting the ever-fascinating Galápagos Islands.

What Darwin Saw: The Journey That Changed the World

I was impressed by this non-ficton picture book. Not only are the illustrations beautiful, it is filled with scientific details, snippets from Darwin’s journals and letters, and notes of explanation. Information is presented in an engaging format. I found it easy to incorporate into our unit study and the illustrations inspired us to try to emulate.

Galapagos at the Crossroads

For many, the Galápagos Islands represent nature at its most unspoiled, famed for its rare flora and fauna. Today, the islands face many perils including a growing human population, invasive species, floods of tourists, and unresolved conflicts between Ecuadorian laws and local concerns. Galápagos at the Crossroads by Carol Ann Bassett provides an alarming portrait of today’s Galápagos Islands.

I really enjoyed this book and it opened my eyes to the peril the islands are facing. The anecdotes Bassett shared also helped to make global connections between the harvesting of sea cucumbers in the islands to the demand for these in China (which we observed during our travels a year ago). Though this book is written with adults in mind, reading aloud select chapters would provide middle school students with an understanding of these endangered islands.

2 comments on “The Galápagos Islands: A List of Books to Read Aloud”