My daughter has been interested in fly fishing since she was a toddler.  Fly fishing is a big sport in Central Oregon and we were surrounded by avid fishermen and women who loved their sport and were keen to share their passion with others.  The retail store, Orvis, even had an outdoor casting course downtown.  Our neighbor welcomed her into his ‘office’ on a few occasions so she could ask questions and admire his amazing collection of flies.  He even took us out for a lesson one afternoon for our first lesson in casting, Fly Fishing ~ A Future Hobby. 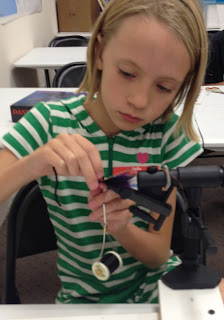 Since then she has occasionally talked about getting her own fly pole (though they didn’t make a weight light enough for her until now – she has grown, after all), taking fly fishing lessons, and even getting a fly tying kit with which to tie her own flies.  We never knew how serious she was until recently – after all, my husband and I aren’t fly fishermen.  Then again, we were not archers either until Buddy took up the sport. 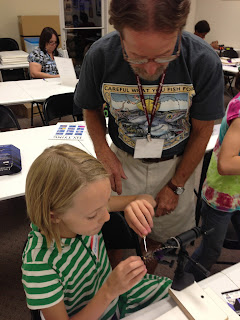 Shortly after we moved to Northern California, a nearby children’s museum featured an exhibit on fly fishing that provided us a greater understanding of the art, science, and history of fly fishing.  Her interest was peeked even more and she asked for a fly tying kit for her birthday.

Serendipitously, at this same time, I stumbled upon an advertisement in a local publication of an upcoming fly tying class for youth.  Perfect!  We thereby informed her that we would buy her a kit upon completion of the course.  In this way, we could also make an informed decision about what type of vise and other tools to purchase. 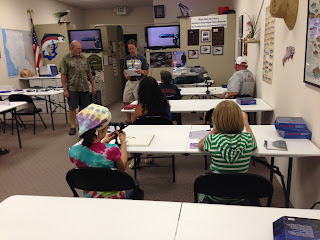 She has been looking forward to this class for a couple of months now.  To make it even more exciting for her – a new friend we met this summer is joining her for the six-week course. Finding her passions is great – sharing that passion with a friend is priceless.

Over the next few months, she will be featured as a guest blogger to share what she has learned in fly tying class. I encourage you to follow along – I know she’d love to hear from you.