The past few weeks have been all about the world’s largest trees.  We recently accompanied DH on a business trip to Oakland.  We got an early start and arrived at the Muir Woods National Monument just as they opened.  We thereby had the serene wilderness nearly to ourselves and the kids were able to really take the time to read the signs and journal without distractions.
They completed two activity books while at the Muir Woods … Redwood Discovery: A Quest at Muir Woods  and the Muir Woods Junior Ranger activity book.  They were delighted with the badge they earned as it is made from redwood! 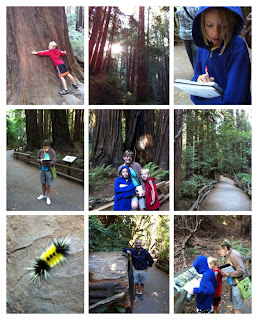 A few weeks later we made an excursion to Humboldt County for a little sightseeing where we took in Humboldt Redwoods State Park. Here we enjoyed the Visitor’s Center (which featured several great hands-on activities) and did a little letterboxing.  Our letterbox quests led us to the Albino redwood tree!  I didn’t realize that albinism occurred in plants.  The albino redwood is a redwood tree (Sequoia sempervirens) which is unable to produce chlorophyll, so has white needles instead of the normal green.  It looked like a tree from the Chronicles of Narnia. 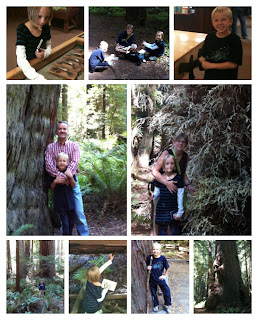 While we were seated in the woods to record a letterbox find, a woman inquired casually, “Do you homeschool your kids?”  When I assured her that I did, indeed, she replied, “I thought so.  They are so engaged and taking in the moment.”  This really touched my heart. 🙂 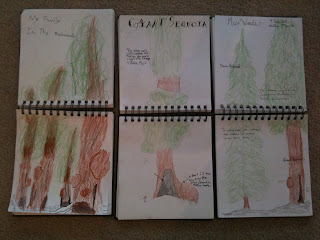 Upon our return home, we journaled about our adventures.  We added a few John Muir quotes and talked about what it must have been like when Muir saw the woods himself … before paved highways. I was delighted when I stumbled upon a book, Steep Trails by John Muir, in our local library.  The book is a volume of papers brought together in one volume.  They span a period of 29 years of Muir’s life, during which they appeared as letters and articles for publications of limited and local circulation (for the most part).  I’ve read just one excerpt thus far, “A Geologist’s Winter Walk,” and the kids have really enjoyed his writing style.  We look forward to reading more in the days to come.
[Admin Note ~ You can enlarge the images by simply clicking upon them.]