The recent sale of The Scream at a Sotheby’s auction in New York for $119+ million has underscored the resurgence of interest in the Norwegian artist, Edvard Munch, and marks the 150th anniversary of his birth in 2013.  To celebrate the sesquicentennial of his birth, Sons of Norway members all over the world are developing programs to explore his life’s work.  Today, I share an Edvard Munch lesson plan with you.

Who is Edvard Munch?

Edvard Munch was born in Ekely, Norway on December 12, 1863 – the son of a military doctor. As a youngster, both his mother and his teenage sister died of tuberculosis.  Their absence left a profound mark on Edvard – the youngest of the Munch family. At the age of seventeen, after beginning to pursue a career in engineering, young Munch decided to give it all up to devote himself to painting. After studying at the Oslo Academy and under leading Norwegian artist Christian Krohg, he began showing his work – at times causing quite a stir.

Spending summers in Norway and dividing the rest of his year between Paris and Germany, Munch attended literary circle meetings, exhibited regularly and experimented with woodcuts and etchings (in addition to paintings). As with most artists, much of Munch’s subject matter came directly from his life experiences. From the death of family members to love lost, the images in his art were at times too much for the general public to bear. Often called the first of the expressionists, Munch left an indelible mark on the history of art. 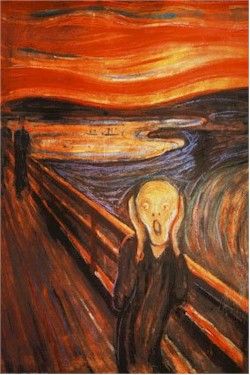 His Most Recognizable Painting

The Scream is his most recognizable painting, arguably it is one of the most recognized paintings of all time. Munch painted many variations of The Scream, depicting a ominous red sky in each. Admirers of his work have often debated the cause for the fear depicted in the painting. Donald Olson, a physics and astronomy professor at Texas State University, and his colleagues determined that debris thrown into the atmosphere by the great eruption at the island of Krakatoa, in modern Indonesia, created vivid red twilights in Europe from November 1883 through February 1884. The local newspaper in what is now Oslo reported that the phenomenon was widely seen, the astronomers said.

I introduced Munch to our Barnesklubb group earlier this week by reading the short biography described above.  I then shared several of his paintings with the kids that I had saved to the camera roll on my iPad.  Some of his work deals with themes that can be rather dark.  Many of his paintings are self portraits that reveal his troubled mind.  Prior to the lesson, I thereby took time to select paintings that predominately featured landscapes or people casually walking.  I’ve pinned the images I used in my Barnesklubb board on Pinterest. 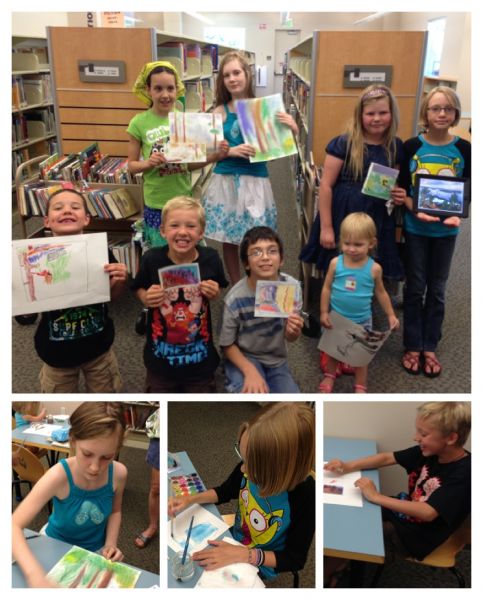 The kids each selected a favorite painting and thereafter tried to recreate the image themselves.  I had printed each painting onto paper, approximately 3″ x 2″ in size so the kids could reference it quickly.  I provided each child with drawing paper (11″ x 9″) and a variety of media choices was made available – crayon, colored pencil, watercolor, and chalk pastel.

Interestingly, the boys all chose crayon and most of the girls chose chalk pastels (with the exception of the youngest, age 3, who contentedly explored  the blending of colors with watercolors and my daughter, though she crumbled it up and explained she would try again at home with fewer distractions).  I also found it interesting that the boys all drew a small square on their drawing paper, creating something of a frame.  The girls on the other hand used the entire sheet of paper, though some cut it to a smaller size before beginning.  In the group photo (above), the boys had asked that I trim their paper but you can still see that there is a small white frame around their art.

You can read more about Edvard Munch on the official Norwegian anniversary page, Munch 150. You may also be interested in a beautiful digital magazine, Norway Today, offered free by  the Norwegian Embassy.  The current issue features an article on Munch on page 6.