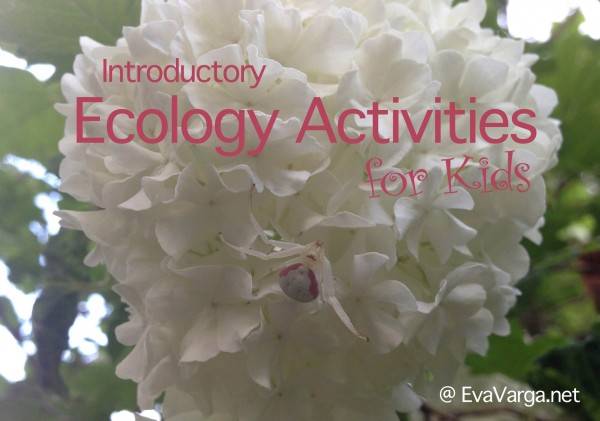 When the kids entered the room, I asked them to copy down the following hierarchy into their notebook.  As they were underway, I spent a few moments quickly reviewing the definition of each (most of which we had covered previously) and how they built upon one another.

The kids were already familiar with food chains and the terms carnivore, herbivore, and omnivore.  We thereby used a ball of yarn and a set of forest animal cards to create a food web. We sat in a circle on the floor and I distributed the cards randomly.  I then asked the kids to read aloud their card (mosquito, raccoon, oak tree, bark beetle, woodpecker, beaver, manzanita, wolf, bat, etc.) and as they did so, we connected the organisms (passing the ball of yarn to one another) to show their relationships for food, shelter, etc. Once everyone was linked, we talked about how illnesses, climate change, and population declines can effect the entire web. In doing so, the kids would let go of their part of the yarn to help visualize how changes and impacts to one component of the web affect the entire ecosystem.

I first introduced the term symbiosis to the kids and then provided examples of three kinds of symbiotic relationships found in nature:  commensalism, mutualism, and parasitism.  As I shared examples, it soon became apparent that the kids were familiar with others, resulting in quite the lively discussion.  One of my favorite ecology activities is a game from Project WILD called Good Buddies, a variation of the card game, Old Maid.  After the kids completed writing the definitions in their notebooks, I distributed a set of cards to each group and we played for about 15 minutes.  A variation of the cards and instructions was developed by The Science Spot and can be downloaded here, Good Buddies.

[ Admin Note:  I have been using Project WILD activities since my first year in the classroom and have had a lot of success with the curricula.  If you ever get a chance to take part in a workshop – I highly recommend it. ]

Another fun activity from Project WILD is Quick Frozen Critters – a variation of Freeze Tag or Sharks & Minnows.  In this game, students discover how competition for food affects the population and the importance of adaptation in predator / prey relationships.  The goal for the prey is to collect 3 food tokens by running across the field, picking up ONE token, and returning to the ‘permanent shelter’ (prey may collect only one token at a time and thereby need to run across 3 times). All the while, the predators goal is to capture 3 prey animals by lightly tagging them as they are in motion.