Invertebrate animals are fascinating to adults and children alike. We continued to explore these diverse animals this week, this time looking closely at Echinoderms (Animals with Spiny Skin) and Molluscs (Animals with Soft Bodies).  Not unusual in taxonomy, the nicknames we apply to these groups can be a little confusing.  Many echinoderms actually do have “spiny skin”, but others do not. This phylum exists exclusively in the sea, and cannot be found on land or in fresh water.

Molluscs are the largest marine phylum, comprising nearly a quarter of all the named marine organisms, yet numerous molluscs also live in freshwater and terrestrial habitats. They are highly diverse, not only in size and in anatomical structure, but also in behaviour and in habitat. What’s more, echinoderms and molluscs provide us with the opportunity to discuss symmetry and styles of locomotion in more depth. 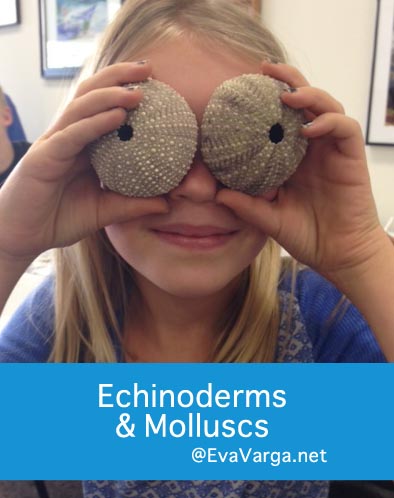 To begin our lesson, I encouraged the kids to take notes on the chart I had created the previous week (if they had printed it) or directly into their notebook.  The characteristics for each phyla were listed on the white board: 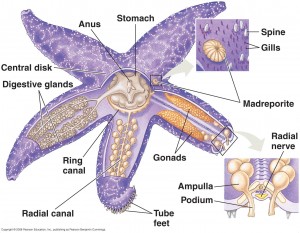 I passed out a number of preserved specimens (all dried endoskeletons or shells of urchins, sea stars, and sand dollars).  Students were asked to make a detailed sketch in their notebook and label the parts according to the diagram.

I distributed to each table. (We were not able to observe the internal anatomy of an echinoderm, we focused on the external parts only – spine, central disc, and tube feet).

I passed out clams to each pair of students and asked that they make a detailed sketch in their notebook to show the internal anatomy of the bivalve.  Again, they were encouraged to label the parts according to the diagram I distributed to each table.  I walked around to each table and helped them to identify the parts illustrated here on their specimen.

To further their study of invertebrate animals, I encouraged the kids to investigate another invertebrate using the hexagon foldable I provided last week.  Perhaps one mini-book for each phyla of invertebrates?  Anyone up to the challenge?

If possible, it would also be beneficial to visit a pet shop or a store that specializes in aquaria. If you are fortunate, you may be able to observe closely live specimens in their natural habitat (albeit simulated). Even better – go snorkeling!

If you would like the two printables (Charting the Animal Kingdom: The Invertebrates and the Invertebrate Investigation) I described here (a visual of which was provided in last week’s post, Simple Invertebrates) be sure to subscribe to my newsletter.

Additionally, this lesson is one of several in the Amazing Animals curriculum unit I have written to introduce middle level students to zoology.  This 10-week unit is full of inquiry-based activities and lesson plans fully outlined for you.