We spent a wonderful afternoon with our COOL friends at a local park on Friday. On the way home, we made a few stops. One of which was Pet Smart. We needed to get crickets for our Bearded Dragon and while we were there, the kiddos asked if we couldn’t buy a fish as well. As we are studying Vertebrate Animals in science – I couldn’t refuse and I allowed them each to pick out a Betta. I’ll be posting in a few weeks the activities we do in regards to Fish – so be sure to check back.

When we returned home, rather than release the crickets in our lizard’s terrarium immediately, we took some time to observe them more closely. Coincidentally, a recent Nature Hour focus is Crickets! Sweetie drew this picture of a female cricket for her nature journal. I read aloud from the Handbook of Nature Study as the kiddos observed the crickets and sketched (Buddy opted not to sketch this time).

That evening, after the kiddos were tucked in bed, DH returned from his buddy’s house where the two grown boys were tinkering with their RC planes. He brought with him a Praying Mantid that they had found in the garage. What a treat! I couldn’t wait to share the treasure with the kiddos in the morning. I went out onto our front porch (insects converge their at night as we leave the porch light on) to capture a late night meal. The little green mantid wasted no time in capturing the little beetle I had provided.

The next morning, the kids were ecstatic about their friend. “Now we have 5 pets! A lizard, a rat, two fish and a Preying Mantis!” We observed it for quite a while and went out to capture something for it to eat, though it wasn’t too interested in eating while we observed. You can see in Sweetie’s illustration the little circle on the foreleg. We read in The Handbook of Nature Study that this is the ear on a cricket and katydid. We assume it is the same on a mantid.

While enjoying the Sons of Norway picnic yesterday, the little guy Sweetie was playing with found a grasshopper. As they brought it to my attention, Sweetie said, “It is a girl.” “How do you know, Sweetie?” “Because it has that egg laying thing on it’s abdomen.” I was pleasantly surprised by the connection she made… the ovipositor of a cricket and a grasshopper are quite different, but she was right! 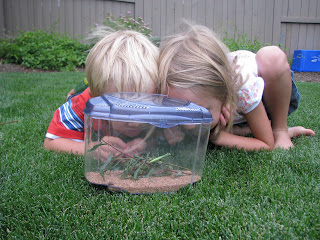 Later that evening, we went out to find our mantid friend a meal and we easily captured a fly. Within a minute or two of the flies arrival within the terrarium, the mantid had it between it’s forearms. We should have observed the fly on its own for awhile – flies are the focus of challenge #25. Next time!