Of the many ways Earth is polluted, light pollution may be the least talked about. Defined as excessive or obtrusive artificial light, light pollution has consequences. It can wash out starlight in the night sky, interfere with astronomical research, disrupt ecosystems, have adverse health effects, and waste energy. 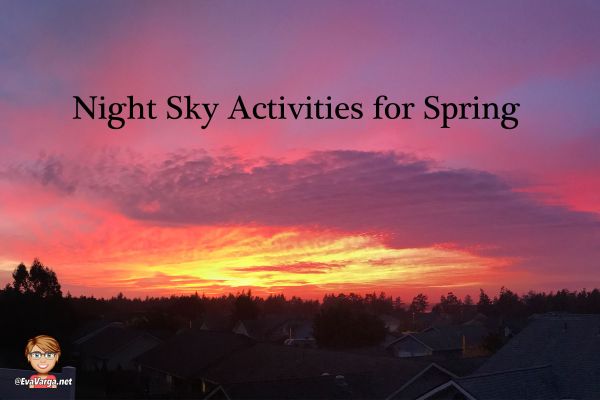 Take a moment to watch this short film that shows how the view of the cosmos gets better in less light-polluted areas.

I would also argue that light pollution causes many students to develop misconceptions. These misconceptions arise because we often fail to provide children with the time and opportunity to simply observe the night sky. After all, if you live in a metropolitan area, it does take some planning and a little driving to get out of the city.

How many young children today realize that during the course of a year, our view of the night sky changes from month to month? Some constellations are always in the sky, while others appear and disappear over different regions. How many children – or adults for that matter – can explain the rotation and revolution of our nearest celestial neighbor, our moon?

If you would like to learn more about common misconceptions in science, read my my five-part series. The Night Sky Each Month

Early in our homeschool journey I read the works of Charlotte Mason. Her words, particularly in regards to the natural world resonated with me,  “We are all meant to be naturalists, each in his own degree, and it is inexcusable to live in a world so full of the marvels of plant and animal life and to care for none of these things.”

With her words in mind, I have always tried to provide my children with ample time in the outdoors and to develop their observational skills. I also love living books that guide them on their discoveries. One of my favorite for astronomy is

.  This book, written by Will Gater and Giles Sparrow, shows the sky as it is seen around the world in both the northern and southern hemispheres. It is the perfect guide for amateur astronomers – the illustrated pictures and monthly sky guides will help you recognize patterns and track changes in the each hemisphere.

Another great story that will delight younger readers is The Moon Over Star which puts the historic moon landing into historical perspective through the eyes of a child.

Charlotte Mason and I would encourage you to get outside and observe the night sky year round. Encourage your child to begin documenting his or her observations by keeping a moon journal. Sketch the appearance of the moon each night and note the location it is visible in they sky. To get you started, here are a few key events this spring.

Worm Moon ~ This full moon phase occurs on March 21st and was known by early Native American tribes as the Full Worm Moon because this was the time of year when the ground would begin to soften and the earthworms would reappear. This is also the last of three super moons for 2019. The Moon will be at its closest approach to the Earth and may look slightly larger and brighter than usual.

Mercury at Greatest Western Elongation ~ The planet Mercury reaches greatest western elongation of 27.7 degrees from the Sun on April 11th. This is the best time to view Mercury since it will be at its highest point above the horizon in the morning sky. Look for the planet low in the eastern sky just before sunrise.

Fish Moon ~ The Moon will be located on the opposite side of the Earth as the Sun and its face will be will be fully illuminated.  Early Native American tribes called this full moon the Full Pink Moon because it marked the appearance of wild ground phlox, which is one of the first spring flowers. Many coastal tribes called it the Full Fish Moon because this was the time that the shad swam upstream to spawn.

Lyrids Meteor Shower ~ The Lyrids is an average shower, usually producing about 20 meteors per hour at its peak. It is produced by dust particles left behind by comet C/1861 G1 Thatcher, which was discovered in 1861. The shower runs annually from April 16-25. These meteors can sometimes produce bright dust trails that last for several seconds. Meteors will radiate from the constellation Lyra, but can appear anywhere in the sky.

Eta Aquarids Meteor Shower ~ The Eta Aquarids is capable of producing up to 60 meteors per hour at its peak in the Southern Hemisphere and about 30 meteors per hour in the Northern Hemisphere. It is produced by dust particles left behind by comet Halley, which has been known and observed since ancient times. The shower runs annually from April 19 to May 28. Meteors will radiate from the constellation Aquarius, but can appear anywhere in the sky.

Blue Moon ~ This full moon will appear on May 18th and was known by early Native American tribes as the Full Flower Moon because this was the time of year when spring flowers appeared in abundance. There are normally only three full moons in each season; a fourth full moon occurs only happens once every 2.7 years, giving rise to the term, “once in a blue moon.” 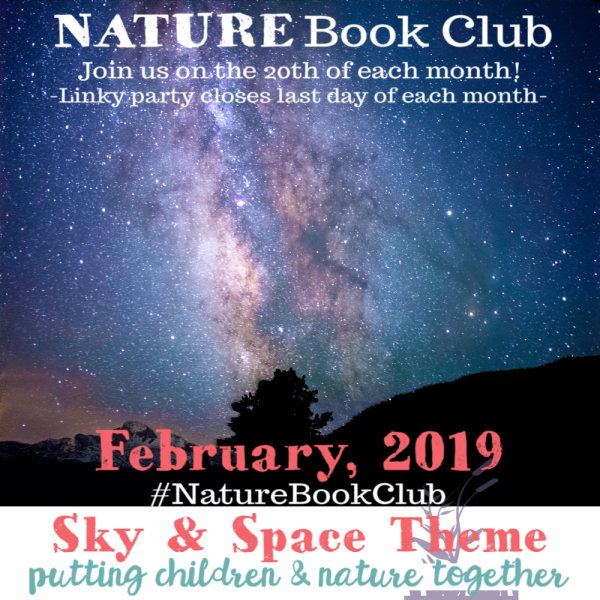 Welcome to the Nature Book Club Monthly Link Up. Devoted to connecting children to nature, the monthly link up will begin on the 20th day of each month. We welcome your nature book and activity related links. Read on for more details.

The Nature Book Club is brought to you by these nature loving bloggers which are your co-hosts. Are you following them? If you don’t want to miss anything, be sure to follow each one.

Here are the co-hosts, their choices of books, and activities for February 2019:

Stargazing with Children by Thaleia at Something 2 Offer

Along Came Galileo Telescope Craft by Emily at TableLifeBlog

Choose an engaging nature book, do a craft or activity, and add your post to our monthly link up.
The link up party goes live at 9:00 a.m. EST on the 20th of each month and stays open until 11:59 p.m. EST on the last day of the month. Hurry to add your links!
You can link up to 3 posts. Please do not link up advertising posts, advertise other link up parties, your store, or non-related blog posts. These posts are removed.
By linking up with us, you agree for us to share your images and give you credit of course if we feature your posts. That’s it.

1 comment on “Connecting with the Night Sky: Activities for Spring”