With great anticipation, our Iditarod Unit Study has begun.  Over the next few weeks, we’ll be following along with the mushers as we also learn about the history of the race, the ecology of Alaska, and integrating numerous other activities across the curriculum.

We made our course map or outline of the route with checkpoints marked.  I think it may be too small (we’ll use it but if we do it again next year, we’ll likely create a bigger map). Sweetie loves geography and shortly after we created the Iditarod map, she made a map of Oregon on her own. 🙂

We also selected our mushers. As we live in Central Oregon, we didn’t put too much thought into our selection, we knew we wanted to go with Rachel Scdoris. In fact, we hope we will get a chance to meet her soon. We also selected 2 other Oregon mushers, Cliff Roberson of Corvallis and Liz Parrish of Klamath Falls. As we have strong familial ties to Norway, I also selected a Norwegian musher, Sigrid Ekran. Next year, if we choose to do it again, we’ll likely be more statistical in our selection.

We have read a few books, most notably Woodsong by Gary Paulsen. I was a little sad to learn he has pulled out of the race this year. We read Whale in the Sky by Anne Siberell and Sweetie asked if we could make a totem pole. I’ll post more about this little project later, but until then, here is a sneak peak. Another book we recently read is The Bravest Dog Ever, The True Story of Balto by Natalie Standiford. When we finished reading, Sweetie said, “I want to draw Balto. He is the best dog ever.” Here is her drawing; As she worked, she narrated a summary of the book, “Some kids were sick and Balto was the leader of the dog race. He pulled the sled with the medicine for the sick kids. When he was pulling the sled, Balto stopped and the guy said, “Go!” but he didn’t go because the ice on the river was cracking. The man was happy. They got the medicine to the kids in 5 1/2 days. Gunnar and Balto were heroes.” A few inaccuracies but overall she nailed the basic idea.

Narration is one of the key characteristics of a Charlotte Mason education. Telling later without prompting is very characteristic. Your child should be able to tell Daddy what they read when he comes home or Grandma over the phone this weekend without referring to the book. You want to know what ideas caught her mind, not get a formal book report. This is a skill we’ve been working on more and more. Right now she verbalizes her narration but as her writing skills develop, I’ll ask that she also write her narrations.

We also try to incorporate daily copywork. I love the Draw Write Now! series of books and we are currently using the Polar Regions edition. Here is a sampling of her work; To read of our later endeavors and activities in this unit study, see my later post Our Iditarod Unit Study: A Summary of Our Activities.

Although we had finished our unit study of China, Sweetie wanted to have a Chinese New Year Party to commemorate her studies. We thereby left all her ‘China’ projects out for display and hung paper lanterns for decorations. We invited the neighborhood kids to join us in the celebration. Unfortunately, most came down with a bug and were unable to come to the party. It was therefore a small but very relaxed atmosphere. 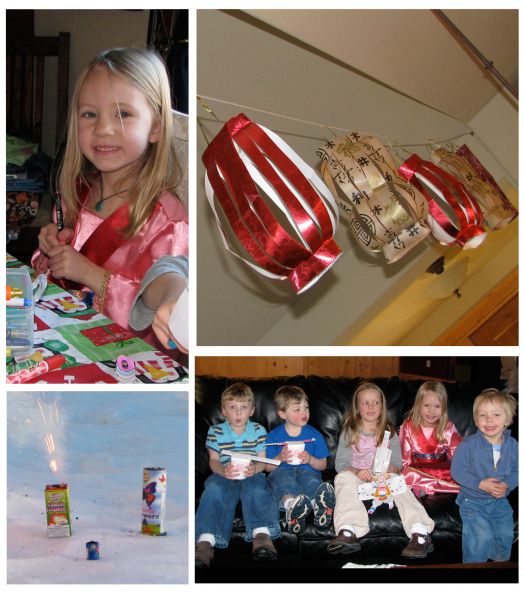 When the party guests arrived, Sweetie greeted them at the door with “Ni hao”, dressed in her Mulan costume from Halloween ’06. The kids then got started on a couple of craft projects: a paper kite (the Chinese were the first to fly kites) and paper lanterns just like those that hung from the ceiling. I was very pleased that everyone enjoyed the activities and worked well together. Buddy was the only one who wasn’t interested in crafting, instead he took a few photographs and wandered about visiting with his friends.

When the kids finished their projects, they gathered in the living room and watched an episode of Sagwa that I had recorded the day before. My kids love Sagwa! I had tried to get the book from the library (I had checked it out previously) but when we checked on Monday, not a single book about China or the Chinese New Year was available.

While they were engaged in the story, I finished preparing our afternoon snack: pot stickers, egg rolls, and BBQ pork. I encouraged everyone to at least try everything but ensured them that they didn’t have to eat it if they didn’t like it. The BBQ pork was a big hit – the egg rolls, less so.

Following our meal, we ventured to the front yard and enjoyed a dozen or so fireworks that I had left over from the 4th of July (we didn’t get the opportunity to use them in the summer – too dry). This was by far the highlight of the afternoon.

When the kids departed, I gave each a Chinese to-go container with shredded metallic red paper, a fortune cookie, a small firework, chopsticks, a pencil and a Valentine chocolate heart (I had them handy!). The treat boxes were adorable and the kids loved them! Another party success!

My daughter, Sweetie, is my guest blogger today.  She shares some of the activities she enjoyed through our China Unit Study. I have been learning about China. These are some of the things I have made. The first one is a map that I made. The map shows the Himalayan Mountains, the Gobi Desert, and the Yellow and the Ygantze Rivers. China is west of the Pacific Ocean. The yellow section shows where they grow rice. The green is where wheat is grown. Rice is white and is a very important food in Asia. The capital of China is Beijing. The Great Wall is in the northern part of the country. The first emperor of all China, Qin, built the Great Wall to keep other armies away and keep China safe. He had his people build the soldiers to keep him safe when he died. The soldiers were found by farmers digging a well. I made a model of the terracotta soldiers. This panda is made of Model Magic. Pandas live in bamboo forests and like to eat bamboo and honey. When baby pandas are born, they are orange and very little. The mom is very protective. Pandas are endangered. Some people try to kill them for their fur. Also, their forests are sometimes cut down for building new places for people. Pandas then have less space to live.

I have been making a lapbook about China. It has lots of mini-books and pictures. Here a couple of the mini-books. One is a mini-book of animals in China. The other one is a book of words about China. I love learning about China. I hope to visit China when I am older.

Admin Note: Sweetie dictated to me what she wanted to say about each photo. I helped elicit more details by asking questions.