My best friend is a veterinarian technician. She and her husband own an animal clinic and for years we’ve talked about taking a tour. Sadly, only now that we are about to move does it come to fruition. 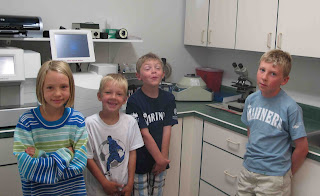 We were greeted upon our arrival and we were first introduced to the receptionist.  Our tour was then underway.  We first visited the technician or lab room where we were shown the numerous instruments and tools that are used. 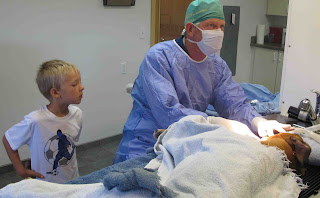 We were then able to watch a portion of an abscess surgery on a large boxer dog.  My little guy was very intrigued, the other munchkins kept their distance.  The veterinarian described how a small burr from cheat grass had most likely embedded into the skin of the dog and an infection ensued.  The cause of the infection was of particular interest as we have discussed the impacts of invasive species a great deal in our studies. 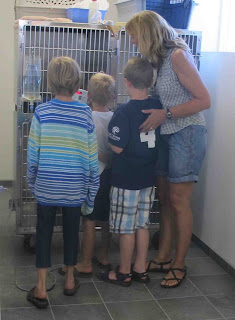 We then toured the other areas of the clinic, including the kennels and the stalls for the large animals. In the photo above, the kids talked quietly to a cat in recovery.  It was fascinating to see how they are equipped to service both large and small animals, though predominately in the clinic they see household pets, namely dogs and cats. 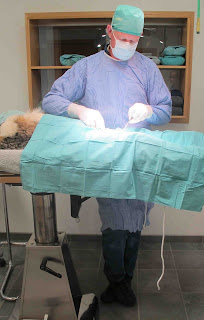 We were then able to watch in completion, a common surgery on a dog … castration. The kids were very interested … though not so much in the particulars of this specific surgery … just the process of surgery itself. It could have been any surgery.

We departed shortly after and enjoyed going out to lunch together.  Later that afternoon, Buddy expressed to me, “I might like to be a veterinarian when I grow up.”