I selected Bats as the topic for our weekly nature study this week because we were camping over the holiday weekend and I knew (as in past years) we would see bats overhead as we sat around the evening campfire.  In the morning, we frequently do a few lessons (math, reading, etc.) as well so I brought along a bat specimen a student had given me years ago.  I gathered the kiddos around and we spent a little time sketching the bat and I read a few excerpts from a field guide on bats. 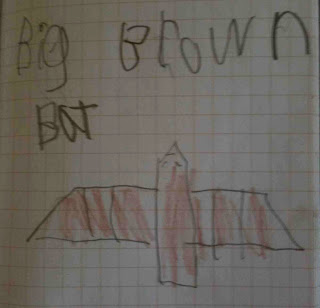 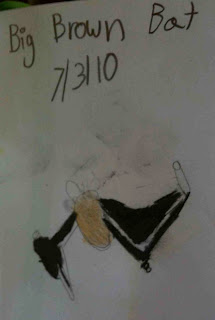 Buddy was in a hurry as he wanted to help the guys inflate our kayaks for the river. MeiLi spent more time on her illustration and experimented just a little with charcoal.

As we talked about bats throughout the weekend, my dad stated that when he was a boy, his father had told him that if you tie a white cloth to the end of a long stick, the bats will follow it.  He and his brothers were skeptical and thereby gave it a go.  Sure enough – the bats swooped down a few times to investigate.  They didn’t try to attack the cloth in any way – they just seemed to come closer as if to get a better “look”.  A few moments later, they resumed their hunt for insects.

Hearing this, we wanted to give it a try as well.  Unfortunately – a number of elements worked against us and we didn’t observe any change in the behavior of the bats that flew above us.  1) Our stick was only about 5′ long.  Dad said though he was a boy, he recalled the stick they used seemed to be 15-20′ feet and was a little unwieldy as a result.  2) They were in a large open meadow or pasture with only a few scattered trees.  We did not have such an open space available at the time – just a small clearing within the campground.  The surrounding trees were mature oaks, maples and fir.  As a result the bats seemed to stay above the canopy.  We’ll definitely be trying this little experiment again.

A year ago, we had an opportunity to attend a Live Bat Encounter program at the local museum.  Surprisingly, I don’t believe that I blogged about it (at least I couldn’t find a post). 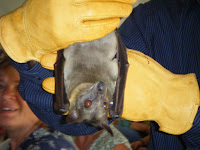 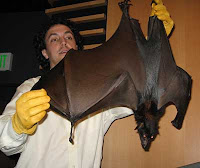 Coinciding with the live encounter, the museum at the time also had a special exhibit on bats showcasing species from around the world.  The one that fascinated me the most were the Honduran white bats shown here. 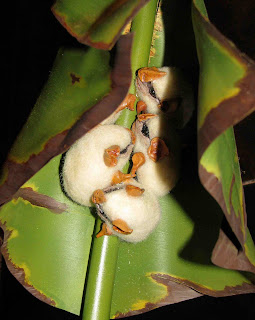 The following is a video clip I recorded during the Live Bat Encounter: