Every year since my daughter was an infant, we have been participating in a fun-filled weekend of games and chaos to celebrate friendship – many of which are life-long relationships. It all started 6 years ago when our friend Bar was reminiscing about the fun he had playing games with his friends when he was growing up. He had enjoyed a few game nights with friends and thought to himself, “How can I make this happen more regularly? How can I bring in friends who have since relocated to other parts of the country?” From this simple inquiry, he developed what we have come to call BarCon (Bar’s Convention of Games & Friendship). 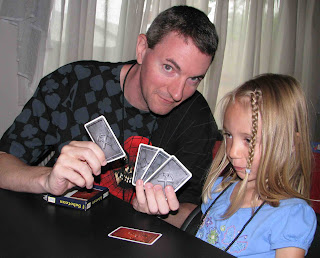 BarCon is essentially the traditional game night expanded to cover the entire span of Labor Day Weekend – Thursday evening to Sunday afternoon. The first couple of years, most of the participants were single or DINKs (Double Income No Kids). Only two families had children – us (Sweetie was nearly a year old during the inaugural event) and one other family ( 2 boys who were then 8 and 11 years of age). By the third year, we had evolved to have several families with infants. 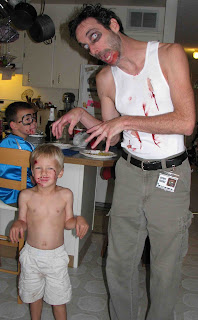 With the exception of the first year, BarCon has always had a theme. In 2005, it was “Movie Monsters”. The years that followed have showcased Pirates, Aliens, and in 2008, “The Good, The Bad, The BarCon”. This year the theme was Zombies – perhaps the most appropriate theme yet, as by the end of the weekend, with little sleep and the plenitude of alcohol, many of the die-hards are in fact zombie-esque. BarCon Bucks have been awarded for those who come dressed in costume and this year, we enjoyed our first costume contest. Spidey (pictured above with Buddy) was without a doubt the best zombie I’ve ever seen. 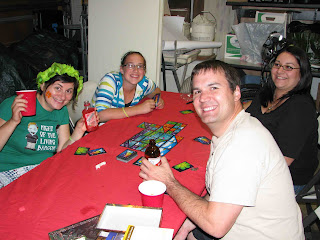 To add to the uniqueness of the event and due in part that many of the participants are computer engineers, a website was developed where participants are required to register for the event. The popularity of BarCon has grown so quickly that staffers have had to cap attendance to ensure there will be enough food and gaming tables for everyone. Upon arrival, participants are given goodie bags that have been filled with personalized M&Ms (it is always a surprise to see whose face will be profiled), protein bars, stickers, BarCon Bucks (for the auction), and other fun toys and goodies related to the theme. Name tags are included and come in handy as Bar has invited not only life-long friends but new acquaintances and work colleagues as well. 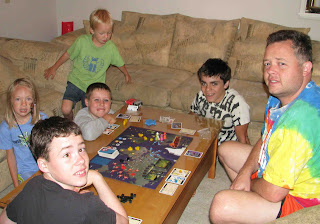 Throughout the weekend, participants earn stars and BarCon bucks for participating in games, winning games, hosting activities, bringing food and snacks, doing chores (taking out the trash, going to the store for more ice, beverages, etc.). An auction table is set up whereby an array of games, books, DVDs, etc. related to the theme are up for bid. The silent auction comes to a close on Sunday following a spectacular BBQ when the winning bids are announced.

Sweetie considers BarCon to be a national holiday – and the other boys (pictured above) say it comes in just behind Christmas in terms of fun! We wouldn’t miss it for the world. 🙂