For the past couple of weeks, the kids have been asking more and more questions about dinosaurs. I answered them the best I could and suggested we borrow some books from the library upon our next visit. When we went on Friday afternoon, Sweetie went immediately to the library catalog and asked me, “How do you spell ‘dinosaurs’?” After I answered her question, she immediately ran off to 567.9 and came back with an armload of books shortly thereafter. Asteroid Impact was one of those books and it was the first one she asked me to read when we got home. We cuddled up beneath a blanket and began to read… 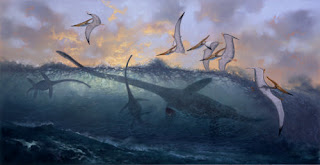 Sixty-five million years ago, an asteroid traveling at 60,000 miles per hour slammed into Earth, plunging the planet into darkness. Douglas Henderson’s Asteroid Impact tells that story, mixing colorful illustrations with scientific explanations and diagrams to explain how an asteroid came to hit Earth and the devastation the crash caused. It discusses the dinosaurs that roamed Earth, the possible origins and kinetic energy of the asteroid, what happened upon impact, and the ghostly world that was left in the asteroid’s wake.

Upon first glance, I assumed they would lose interest soon after beginning as there was a lot of technical information about asteroids. I was surprised that they both listened intently throughout the duration of the book, even asking to look at the illustrations more closely. When we finished we had to get ready for the social at the Sons of Norway lodge so I didn’t get a chance to check their understanding.

At the lodge an hour or so later, as the kids were working on creating a raven flag (the Norwegian raven flag is believed to have been the first European flag to fly over the North American continent) a dad of one of the other young children started to inquire about homeschooling. I answered his questions and said, “Homeschooling has been a wonderful experience for us.” Sweetie chimed in with, “Yeah! We get to learn about things we really want to learn like Mandarin.” Buddy then said, “And asteroids!”

The dad said, “You are learning about asteroids?!” The two of them then began spouting off all these facts from the book about how the asteroid impact led to the demise of dinosaurs. After several minutes of listening to the kids the dad said, “Wow! I’m impressed!” Needless to say, I was too.