Since moving to California, we have enjoyed exploring new cities, the historical landmarks, and the many natural resources.  One of our favorite natural areas is Whiskeytown National Recreation Area.  This past month, we had an opportunity to visit the Camden house area with our Roots & Shoots group. We were delighted to see that several of the historic apple and pear trees in the Tower Orchard were in season. As a result, we weren’t surprised to see bears had been there recently themselves. 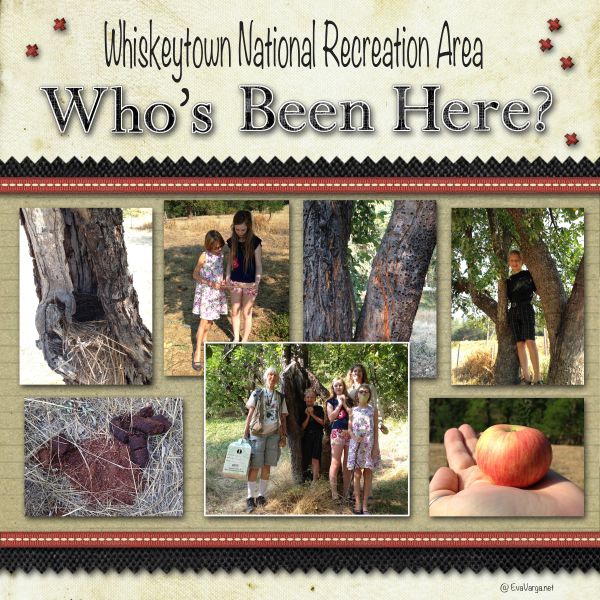 Over 15 varieties of apples are grown in the orchards surrounding the Camden house, all of which are heirloom cultivars, planted in the mid and late 19th century by Charles Camden and Levi Tower. These cultivars are grown organically, possess unique characteristics and are not found in modern apple varieties.

We sampled several varieties – Baldwin, Sheepnose, and a few unknown cultivars.  The Baldwins were the largest and the most popular.  The unknown variety were small but were very tasty as well.

“A visit to a large, well-grown orchard in spring or autumn will aid in making this work interesting. Any apple tree near at hand may be used for the lesson.”
Handbook of Nature Study, page 664

There are a few remaining pear trees.  Sadly, though, the pears we observed had fallen to the ground and were no longer viable.  We were unable to reach those that remained in the upper regions of the trees.  The cultivar were small, about the size of the apple pictured above.

We were not surprised that there was ample evidence that bears had also frequented the orchard.  We had visited in the past and knew that August was a good time to see clues they’d been there – they know when the apple ripen, too.  All along the trail there was bear scat – though it was very dry and old. We could breathe a sigh of relief with the knowledge it wasn’t fresh.  Upon closer examination, we could discern the bears had eaten a significant amount of Manzanita berries prior to their stop at the Camden orchard.

When we arrived at the first cluster of apple trees with fruit, it was clear that this was the bear’s prize.  Branches and limbs were broken and lay littered on the ground.  Claw marks scarred the trunks of the tree.  The grass beneath the tree had also provided a shady spot for a bear siesta.

We gathered a handful of apples to bring home.  Before we departed however, we collected a little water quality data for World Water Monitoring Day.  Levi Tower and his friend Charles Camden settled here not only to take advantage of the gold miners streaming into the area, but because three streams converge here – Crystal Creek, Clear Creek, and Mill Creek – providing ample water for the orchard.

On our walk back to the car, we were astounded with a bit of a gruesome display of nature – though we were aware that dragonflies eat other insects, we didn’t realize they ate their own kind.  I’ve uploaded a video – amazingly, she allowed us to get very close.  Viewer discretion advised.