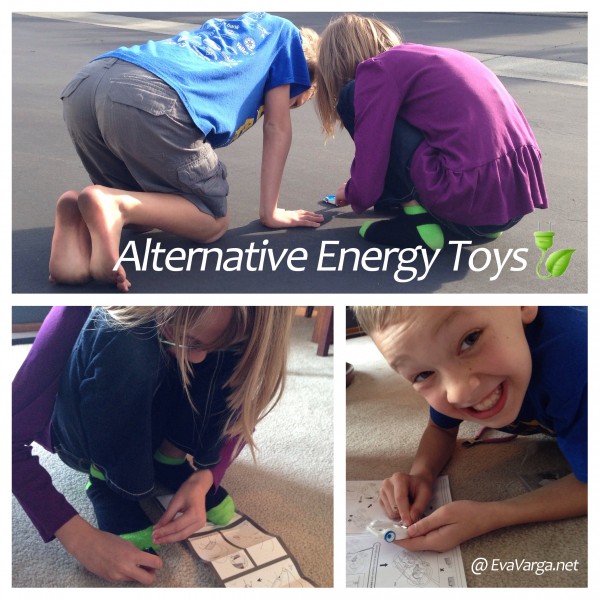 As was expected, Buddy was immediately drawn to the  Salt Water Fuel Cell Car

while Sweetie was interested in the “cute”  Solar Powered Grasshopper Kit

.  As such, there was no argument over who would build what kit – Bliss!

Buddy had no difficulty putting the little car together.  He needed help only with smoothly clipping off the little plastic stubs that remained on the pieces after breaking them apart.  As he put the final pieces together, Sweetie mixed up the salt water solution.  The instructions state that any salt to water ratio will function but the most efficient ratio was 1:5.  We had just reviewed ratios in math so this was the perfect real-life application of the skill. The task enabled me to also explain the concept of efficiency.

Both of the kids loved the Salt Water Fuel Cell Car

– Sweetie even exclaimed, “It would be awesome to have a big fleet of these cars in different colors!” They enjoyed playing with the car for nearly an hour.  A few times, it stopped running and they worked together to figure out the problem.  Sometimes, it was a little debris caught under the wheels.  Other times, there was too much salt water or dirt that clogged up the mechanism.  They would clean it off and let it rip once again.  I loved that they ran into the supply closet and began to set up a track for the car.  Sadly, the car was just a smidgen too wide for the track but they stated they were going to build something another time.

was also fun – but their interest in this was short lived.  The instructions were easy to follow and Sweetie had it put together in only a few minutes.  We took it outside and watched it hop about.  The kids delighted in discovering that if they cast a shadow over the grasshopper, it would stop moving.  They moved on to the car shortly after and showed little interest in the grasshopper thereafter.

NYE01 also included a mini-sundial kit.  A sundial is a device that tells the time of day by the position of the Sun.  The sun casts a shadow from its style onto a surface marked with lines indicating the hours of the day. The style is the time-telling edge of the gnomon, often a thin rod or a sharp, straight edge. As the sun moves across the sky, the shadow-edge aligns with different hour-lines. The DIY activity included in NYE01 was simple and provided us an opportunity to further explore how people, animals and even plants have been using the sun to tell time throughout the ages.

.  This kit includes two styles of wind turbine blades and a gearbox with three different gear ratios for experimenting. The wind spins the turbine, which turns an electric generator, which in turn charges rechargeable AA batteries.  The kids can then use the wind charged batteries to power the model vehicles they build. The six models include a glider, sail car, jet car, tractor, race car, and tricycle. They can also experiment by adjusting the angle and number of wind turbine blades to make best use of the wind, the make the LED light up brightly, and to charge the rechargeable battery as fast as possible.