Last week, we read a few introductory selections about weather and narrowed our focus to wind as it happened to correspond to our poetry selection, Robert Frost’s Now Close the Windows.  We then spent a few hours (over the course of a couple days) engaging in a few inquiry lessons to learn more about wind.  Read on to learn more about air pressure and wind activities in which we took part.

I began by asking, “Does air have weight?” They both said yes.

I then asked, “What is wind?” Sweetie replied, “Wind is oxygen and other chemicals. A little bit of dust and stuff, too.”

“Does dust have weight?” I asked. “A tiny bit,” she replied. “How about oxygen and other chemicals?” I inquired further. She said, “No.”

“Okay then, if dust has a tiny bit of weight. Does air have weight?” This time she responded, “Yeah. A little bit.” 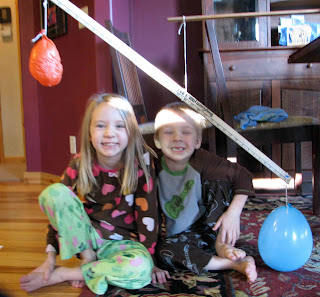 We then set up a little experiment with a balance scale made of 2 meter sticks, some string, and 2 balloons. I blew up each of the balloons and they assured me that they were the same size and had the same amount of air inside (more or less). We then tied them to the strings on opposing ends of the stick so they would balance.

As the kids sketched the set-up, I asked them to predict or make an hypothesis about what would happen if I were to poke a hole in one balloon. They both stated that the air would go out but neither inferred that this would cause the balance scale to tip.

We proceeded and they were delighted to see that though the action was slow (it was a small hole), the orange balloon gradually got smaller and the blue balloon got closer to the ground (gravitational pull). I then asked that they record their observations in words or pictures. [Sweetie’s observation and sketch of the results is shown below with the orange balloon.] 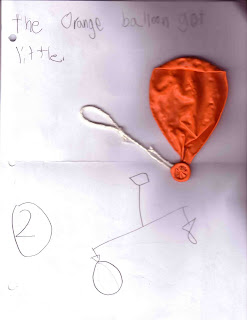 Thereafter, I blew up another balloon but did not tie it closed. We then hypothesized what would happen when we let go of the balloon. Of course, they had had some prior experience with this so they both said, “It will sound like a fart and fly all around!” [I chuckled at that…] 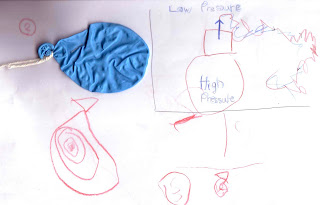 I released the balloon and I then asked them to explain what had happened. “What caused the balloon to zip around like that?” Buddy said, “They air went out!” I then explained, “As we blew up the balloons, we forced air into a small space. There wasn’t a lot of room inside the balloon so the air made the wall of the balloon stretch and get bigger. This created a lot of pressure inside the balloon. The pressure in the balloon was high. The pressure outside the balloon was low. When we let go, the high-pressure air inside escaped into the low-pressure air outside, resulting in a rush of air. Winds behave in the same way: air moves from areas of high pressure to areas of lower pressure. The larger the difference in air pressure from one area to another, the stronger the winds.” We then sketched this in our notebook as well. [Buddy’s sketch of part 2 is visible above.]

We also discussed fronts and air masses. We did a little experiment to answer the question, “What is heavier, hot air or cold air?” using a small jar of warm water (“Hong!” – the kids proclaimed in Korean) and an identical jar of cold water (“Chung!”). We covered the blue jar with an index card and carefully turned it over and placed it atop the red jar (mouth to mouth). While one child held onto the bottom jar, I removed the card. We observed the colder, heavier blue water sinking down into the warmer, lighter red water. We repeated the experiment another time, reversing the position of the jars. This time, the warmer red water stayed on top, though there was a little mixing of the two in the middle.

We discussed that in the same way as the jars of water, a cold air mass will push under a warm air mass to create a cold front. A warm air mass will climb over a colder air mass to form a warm front. Sweetie then completed a couple of worksheets on air currents and fronts. She also learned the difference between a sea breeze and a land breeze and of the cause, the Coriolis effect.

In addition, we also began to compile data on a chart to document our local weather. We continue to do so for 4 weeks and thereafter create graphs with the data that we collect. Click here if you’d like a copy of the chart we are using.