1000 Years Ago on Planet Earth
by Sneed B. Collard III

Have you ever wondered how people lived 1,000 years ago?  If so, we have discovered a book that provides a glimpse into life a thousand years ago.  On each two-page spread, Sneed B. Collard III and illustrator Jonathan Hunt present a different region or civilization;  introducing the Anasazi and Mississippian of North America, the Maya of Central America, the Chimu of Peru, the Vikings of Northern Europe, the Muslims of the Middle East, the Shona of West Africa, the Chola dynasty of India, the Song dynasty of China, and the Aborigines of Australia.

For most civilizations, the author selects high points, but the spread on Northern Europe provides little information on how people lived, stressing instead that the Vikings raided “defenseless towns and villages across Europe and Asia” where they “”slaughtered their enemies, ransomed rulers, and seized slaves, silver, and other valuables.”

For the most part, however, Collard captures the essence of a culture in a few brief paragraphs. Hunt attempts to provide additional clues to the culture, showing clothing, artifacts and the architecture, but the facial expressions are often fierce, or at least somber, and the emphasis on blood in the Aborigine and Northern European spreads taps into stereotypes. Nevertheless, this is a good introduction that will encourage more exploration. 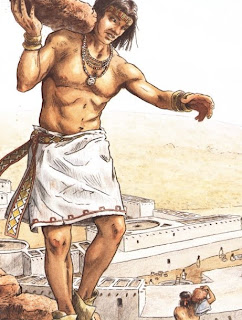